Investors who poured trillions of dollars into index funds on the conviction that no one can beat the market may actually be making it easier to do just that.

All that dumb money could be offering wily stock pickers a chance to buy smaller companies on the cheap, according to new research.

Academics have shown that passive flows into the S&P 500 over the last two decades disproportionately pumped up prices of its largest members -- paving the way for small companies in the benchmark to eventually outperform.

That may seem like a wild idea to anyone on Wall Street who witnessed the relentless rise of the megacaps in recent years. But the argument is that passive flows ultimately make the S&P 500’s small members too cheap relative to the big.

“Flows into funds tracking the S&P 500 index raise disproportionately the prices of large-capitalization stocks in the index relative to the prices of the index’s small stocks,” authors Hao Jiang, Dimitri Vayanos and Lu Zheng wrote in the paper. “The flows predict a high future return of the small-minus-large index portfolio.”

The research will prove timely to critics of the passive boom who say a bubble in the biggest tech names is about to burst, while small caps start 2021 in fighting form.

The team from Michigan State University, the London School of Economics and University of California Irvine analyzed data from 2000 to 2019.

They found that so-called noise traders tend to push up the price of fashionably big companies as they enter the S&P 500. As a result, those companies arrive with higher index weights which in turn trigger more buying from capitalization-weighted funds tracking the gauge. 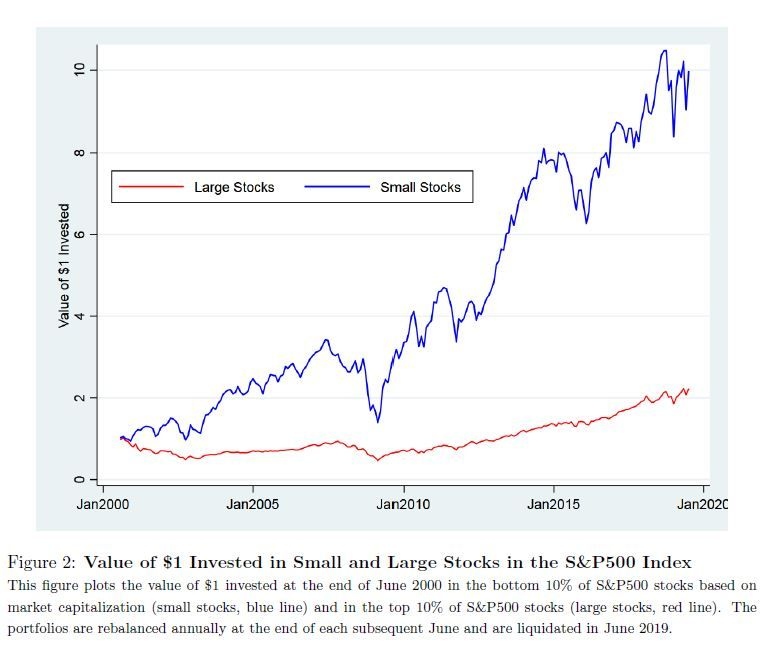 A similar effect occurs when the funds get inflows -- the new cash is more likely to go toward stocks seeing high noise trader demand.

“When prices are distorted, weights of value-weighted indices are biased, and flows into index funds exacerbate the distortions,” the academics wrote.

It all paves the way for the outperformance of smaller S&P 500 companies when the price gap eventually normalizes.

Market moves over the past 10 years offer some support to one side of the story. The big have got bigger, with tech stocks such as Apple Inc. and Amazon.com Inc. accounting for an ever-increasing share of the index, while smaller companies in global indexes underperform.

But the longevity of that trend has killed confidence in the so-called size factor, a well-known quantitative strategy based on the notion that small-caps outperform large-caps over the long run.

The new research suggests that the size effect lives on -- just within the S&P 500, rather than across the entire stock market as the old academic studies once stated.

A “small-minus-large” portfolio of stocks in the index -- which takes a long position in the smallest shares and shorts the biggest -- earns an average 10 per cent per year, the research found. But an equivalent portfolio using shares outside the S&P 500 delivers an insignificant return, indicating the mountain of cash indexed to the benchmark may be creating the distortion.

Wall Street has long fretted the side effects of the indexing boom, with researchers warning about everything from the co-movement of shares to the threat to standards of corporate governance.

The biggest question hanging over the latest research is if and how smaller companies can ever catch up.

Megacap defenders point to fundamental justifications for their lofty valuations, such as Big Tech’s ability to capitalize on technological shifts and grow profits. There is evidence that passive investment has made S&P 500 prices more informative on aggregate, if not always on an individual basis.

Yet if the distortions keep growing, they may sow the seeds of their own reversal. A working paper last year from the Board of Governors of the Federal Reserve System suggested that ultimately a “feedback effect” may disrupt the active-to-passive shift itself.

“If index-related price distortions become more significant over time, they may boost the profitability of active investing strategies that exploit these distortions and ultimately slow the shift to passive investing,” the authors wrote.