This election will be about personalities over policy discussions: Flavio Volpe

Prime Minister Justin Trudeau, who called an election Wednesday, heads into the campaign with the economy on his side.

A survey by Nanos Research Group for Bloomberg News shows Trudeau was holding on to his lead on the crucial question of economic stewardship in the days leading up to the campaign launch. The poll found 34 per cent of respondents saying they trust Trudeau the most to manage economic growth, versus 28 per cent for Conservative Party leader Andrew Scheer.

Job gains, better-than-expected output in the second quarter and rising home prices all suggest the Canadian economy is relatively stable despite pockets of weakness seen in the U.S. and other advanced economies. And Trudeau’s Liberal Party is hoping to capitalize politically on the economic strength, as the Canadian leader struggles to recover from an ethics scandal hurting his personal brand.

Trudeau kicked off the campaign Wednesday by putting his economic record front and center. “We spent the last four years making things better, and we have the record to prove it,” Trudeau told reporters in Ottawa, citing a “dramatic” drop in poverty, one of the lowest unemployment rates in the country’s history and increased job creation.

“Justin Trudeau having the advantage on this is actually critical for the upcoming election,” Nik Nanos, chairman of Nanos Research, said in a telephone interview. “What the numbers suggest is that Canadians are more likely to think he is a better choice than Andrew Scheer.”

Canada’s election will be held on October 21. Trudeau’s Liberals are neck and neck with Scheer’s Conservatives, each with about 34% of the vote, according to a polling tracker maintained by the Canadian Broadcasting Corp. 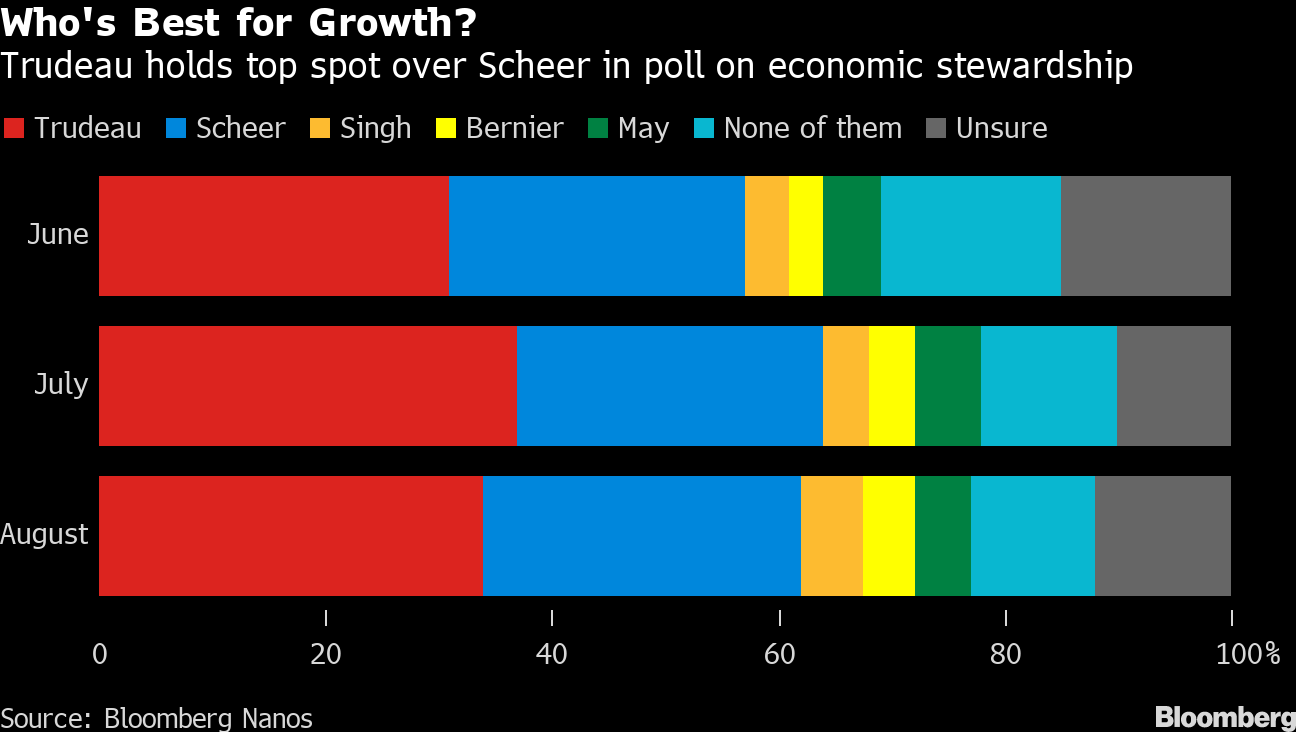 A strong economy isn’t a guarantee of electoral success. For one, it hasn’t helped incumbent parties at the provincial level in recent elections. The Conservatives are also focusing their narrative around affordability issues, with a message that many Canadians are still not personally getting ahead despite the strong macroeconomic numbers.

“The economy is performing reasonably well and what we’ve seen is that it didn’t seem to have much impact on elections in Ontario, Quebec or British Columbia that all showed similar results,” Avery Shenfeld, chief economist at Canadian Imperial Bank of Commerce, said. “If you’ve started to watch the ads or listen to some of the early campaign speeches, they seem to be focused on other issues rather than the general state of the economy.”

Trust in Trudeau to manage the economy is higher in Atlantic Canada and Ontario, and with older Canadians. Scheer scores higher in the energy-rich prairies. Trudeau’s numbers are down slightly from the 37 per cent he scored in July. The two leaders were tied on the question as recently as May.