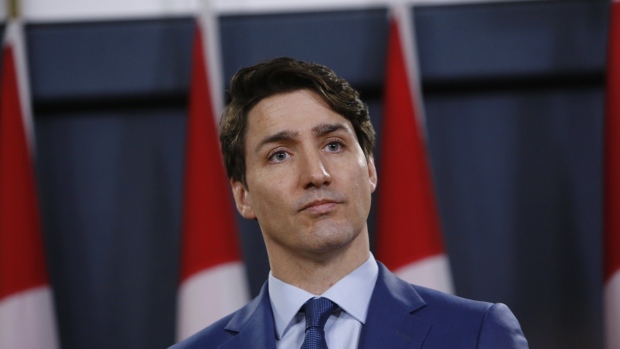 Speaking to reporters Thursday in France, Trudeau says he will see if it's appropriate to have a conversation directly with China's President Xi Jinping about a number of bilateral difficulties later this month at the G20 summit in Japan.

Relations between Canada and China have deteriorated since the December arrest in Vancouver of Huawei senior executive Meng Wanzhou at the behest of the United States.

Chinese authorities have also blocked imports of Canadian canola seeds, alleging they found pests in shipments, and increased their inspections of pork.

"When it comes to China, obviously, our top concern is the release of Canadians who are detained in an arbitrary way by the Chinese for political reasons," Trudeau said in French from Normandy, where he marked the 75th anniversary of D-Day.

"We are also concerned by their actions on canola and the potential of other actions on other products. We will see if it's appropriate or desirable to have a conversation directly with the Chinese president."

The federal government says it has tried unsuccessfully to send its inspectors to China to examine Chinese evidence of pests in the canola shipments. Canada has also been unable to schedule high-level engagements on the matter despite multiple efforts.

Agriculture Minister Marie-Claude Bibeau told a parliamentary committee later Thursday that Canadian scientists finally had a conversation Wednesday night with Chinese officials about their canola concerns. Bibeau said she was encouraged by the discussion, which she said might have reactivated the file.