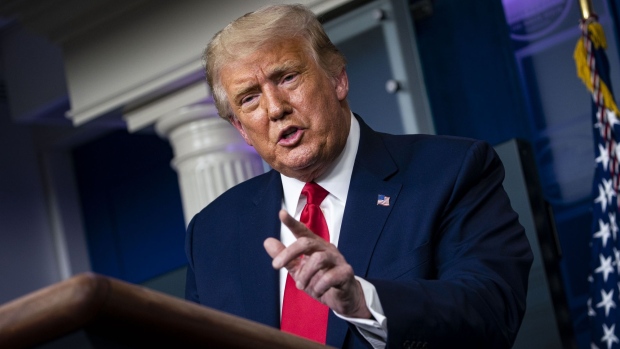 The Trump administration has shifted billions of dollars previously allocated to public-health programs into its Operation Warp Speed vaccine push, reflecting the U.S. government’s increasing focus on a medical solution to ease the COVID-19 pandemic.

The transfers, disclosed in a government audit, reported by Bloomberg News and described by congressional aides, have grown the budget of the Warp Speed program to as large as US$18 billion, much larger than the US$10 billion figure the administration has routinely cited in public.

One of the biggest transfers came in August, with US$6 billion pulled from US$16.7 billion that had been allocated to the U.S. Strategic National Stockpile, which buys, holds and distributes crucial medical supplies in times of national crisis.  The money had originally been meant to replenish stocks of medical protective gear, ventilators, and COVID-19 testing supplies, all of which have experienced shortages at points during the pandemic.

The transfer, disclosed in a footnote buried on page 135 of a Government Accountability Office report this month about the U.S. response to the pandemic, came after Health and Human Services officials said that they had been unable to spend about US$1 billion of the money allocated for the stockpile.

The same GAO report found that shortages of personal protective equipment persist, even as the stockpile has purchased hundreds of millions in supplies. Concerns from nurses spurred the Trump administration to release millions of masks from the stockpile, but health-care workers say they still don’t have enough, particularly of N95 respirators.

HHS pulled another US$700 million from the Centers for Disease Control and Prevention and directed it to Operation Warp Speed, Bloomberg News reported on Sept. 16. HHS also drew US$300 million in CDC funds for a planned advertising campaign, Robert Redfield, the CDC director,  told Congress last week.

A person familiar with the situation said that much of the CDC funds would likely have gone to state and local health authorities responding to COVID-19. Redfield told Congress at the hearing that the agency needs an additional US$6 billion in funds to help states distribute any coronavirus vaccine that becomes available.

In a statement, a senior HHS official said that the department was using COVID-19 response money provided by Congress to get a vaccine to the American people as quickly as possible.

Warp Speed was designed to quickly fund pharmaceutical companies’ efforts to develop vaccines and drugs, financing manufacturing and guaranteeing purchase of vaccines ahead of clinical trials that will show if they work. The program will likely shave years off the time needed to find a vaccine and if successful may save tens of  thousands or hundreds of thousand of lives in the U.S., and potentially more around the world.

In public statements, the Trump administration has repeatedly said that the Warp Speed program is funded by US$10 billion that Congress directed to the effort, along with “other flexible funding.” But a close review of publicly available records of the deals show agreements already struck with private-sector entities under the program total almost US$13 billion.

HHS declined to provide Bloomberg News with a full accounting of Warp Speed’s sources of funding or commitments.  An HHS spokesperson referred to the agency’s website describing the US$10 billion and other flexible funding, and said that the program has allocated about US$10 billion to private partners.

Aspects of the funding transfers were described by congressional aides familiar with the program’s finances, who spoke on condition of anonymity. One of the aides said that the movement of funds and lack of transparency have concerned Democrats in Congress.

Until July, the administration provided Congress with detailed breakdowns of how Warp Speed funding was obligated, and how much went to vaccines, therapeutics and diagnostics, said the aides. Those funding lines have since been consolidated into a single line referring to the Biomedical Advance Research and Development Authority, obscuring the details, they said. Lawmakers have asked the Trump administration for breakdowns of how the funding is allocated, without success, one aide said.

Congress passed a series of relief packages in the spring that dedicated US$2.6 trillion in pandemic response, as virus-related shutdowns wrecked the economy. Those funds went to individuals, businesses, health-care providers, and state and local governments, among other uses. They included additional funding for the CDC and the Strategic National Stockpile to respond to the pandemic. The Democratic House passed an additional US$3 trillion aid measure in May, but negotiations with the Republican-controlled Senate stalled over the summer.

Such transfers are allowed under the laws that appropriated the funds. It’s also not unusual to move funds around among different parts of government when the law provides that flexibility, said Howard Koh, a former HHS Assistant Secretary for Health in the Obama Administration. But he said the situation raised questions after reports about “how HHS is overseeing these agencies, CDC and FDA in particular, and whether the public health experts are able to do their jobs without interference.”

“Transparency has got to be held at the highest level,” said Koh, now a professor at the Harvard T. H. Chan School of Public Health.

Accelerating a vaccine is central to President Donald Trump’s response to COVID-19, as well as his political future. He has contradicted top agency health experts on how quickly a shot may be ready, saying one could be available in mere weeks, ahead of the Nov. 3 election, with broader access to the public by April. Scientific leaders in his administration have said the middle of 2021 or later is more realistic for wide distribution.