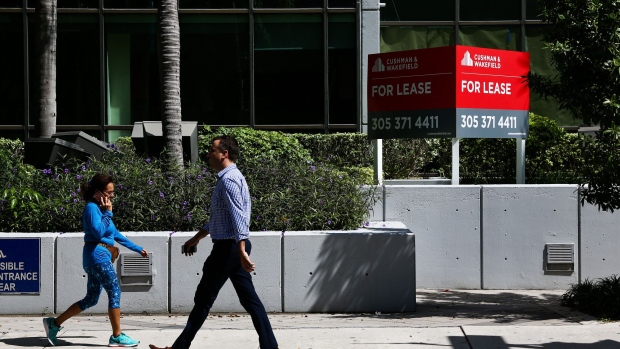 Pedestrians walk past Cushman & Wakefield Inc. signage in front of an office building for lease in the Brickell neighborhood of Miami, Florida, U.S., on Friday, Sept. 30, 2016. While overall U.S. home inventory continued to decline in July on a year-over-year basis, a fifth of the nation's 100 largest markets saw increases in supply, according to a report Wednesday from real estate search engine Trulia. Half of the top 10 gainers were communities in Florida. Photographer: Scott McIntyre/Bloomberg , Bloomberg

(Bloomberg) -- The Trump Organization’s former appraiser Cushman & Wakefield Inc. was found in contempt of court and will be fined $10,000 a day for failing to produce documents subpoenaed in a New York investigation of the former president’s business.

Cushman & Wakefield failed to block the subpoenas in court and on appeal and was ordered to turn over “an enormous number of documents” by June 27. On June 29, the company sought an extension.

“This court is incredulous as to why Cushman & Wakefield would wait until two days after the court-ordered deadliine had lapsed to initiate a process of asking for yet another extension,” New York Supreme Court Justice Arthur Engoron wrote in an order Tuesday. He said the $10,000 a day fine would start July 7 until the company complies with the subpoena.

The same judge in April held Trump in contempt of court for failing to turn over records related to potentially fraudulent asset valuations at his sprawling company, resulting in $110,000 in fines against the former president before he was found in compliance last month.