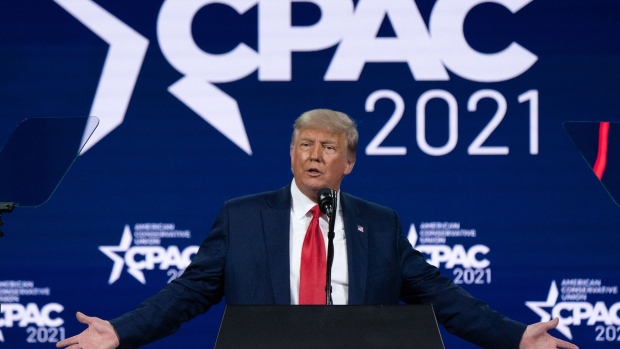 Donald Trump didn’t formally announce his candidacy for president at the year’s marquee conservative gathering, but inched close enough to effectively freeze the 2024 Republican field and put would-be rivals on notice that he remains both king and kingmaker.

The former president’s central argument at the Conservative Political Action Conference in Orlando, Florida, on Sunday was that he’s the best candidate to win in 2024 because, he claims, he never lost in 2020.

In his first public appearance since leaving office Jan. 20, Trump spent about half his 90-minute speech on false claims of widespread election fraud in November, and hinted that the 2020 contest may not have been his last. “Who knows? I may even decide to beat them a third time.”

But after nearly six weeks without access to social media or campaign rallies, Democrats weren’t the only targets of Trump’s pent-up scorn.

He solicited boos from the audience toward a list of 17 “grandstanding” Republican lawmakers who had voted to impeach or convict him for inciting an insurrection at the U.S. Capitol on Jan. 6, giving some of them them derisive nicknames and ending with “warmonger” Wyoming Representative Liz Cheney.

‘Get Rid of Them’

“The good news is in her state she has been censured, and in her state her poll numbers have dropped faster than any human being I’ve ever seen,” he said of the third-ranked Republican House leader and daughter of former Vice President Dick Cheney. “So hopefully they will get rid of her with the next election. Get rid of them all.”

“But the Republican Party is united,” he continued a moment later. “The only division is between a handful of Washington, D.C., establishment, political hacks and everybody else all over the country. I think we have tremendous unity.”

The annual gathering is often the first proving ground for GOP presidential hopefuls, and Trump himself was once viewed skeptically by its members.

This year, the likes of Texas Senator Ted Cruz, Florida Governor Ron DeSantis, former Secretary of State Mike Pompeo, and South Dakota Governor Kristi Noem showed up for an audition, only to find Trump already eyeing the role they wanted. Still, they professed their loyalty to him.

For four days, a lineup of Trump backers touted the successes of his one term in office. Pompeo, a former Kansas congressman, extolled Trump’s foreign policy successes -- and by implication, his own -- while former economic adviser Larry Kudlow did the same on vaccines and the economy.

Other possible Republican candidates who might have been more critical, like former UN Ambassador Nikki Haley and Maryland Governor Larry Hogan, stayed away entirely.

Indeed, the event showed little of the soul-searching that might be expected from a party that lost White House and the Senate three months ago, and remains the minority in the House of Representatives.

And in Trump’s speech to close the conference, he hewed to many of the lines that thrilled crowds at his rallies through two campaigns, with new references to the recent Texas power crisis, the impeachment, and some specific executive actions taken by President Joe Biden.

In a mix of scripted and unscripted remarks, Trump ruminated on his popularity in the Republican party, the unreliability of wind power, transgender women in sports, Central American gangs, “cancel culture” and other greatest hits, even recycling the line from his first campaign event in 2015 by accusing Latin American countries of “sending rapists and murderers” to the U.S. as immigrants.

Neither Trump nor CPAC attendees dwelled on the elephant that barely entered the room: The pro-Trump mob that ransacked the U.S. Capitol, egged on by Trump’s claims of election fraud and taunts of his own vice president.

“We have to address what happened at the Capitol, because some people decided to disgrace the movement by raiding the Capitol,” Fox News commentator Lawrence Jones said in a panel on liberal mob violence in a rare reference to the assault. “Maybe, just maybe, in every movement there are bad apples.”

But the idea seemed to flummox some of his co-panelists. “There was a lot of people there,” said radio talk show host Wayne Dupree. “I really don’t know.”

The appearance followed a month in which Trump has kept an uncharacteristically low profile. But from his Mar-a-Lago club in Palm Beach, in emailed statements and in a handful of interviews to friendly outlets, he’s blasted Senate Minority Leader Mitch McConnell at length, eulogized conservative talk show host Rush Limbaugh, and made unfounded allegations of election fraud -- all while avoiding questions about his future in the party.

Trump’s concluding speech to CPAC ratified the consensus of the attendees that this is not a conservative movement wallowing in its loss to Biden as much as a government-in-waiting, counting down the three years and 11 months for Trump to “Make America Great Again,” again.

In a straw poll, 97 per cent of attendees approved of his leadership of the party, 70 per cent want him to run again, and 55 per cent said he was their preferred candidate in 2024. (The other top contenders were Trump loyalists: DeSantis, followed by Noem and Donald Trump Jr.)