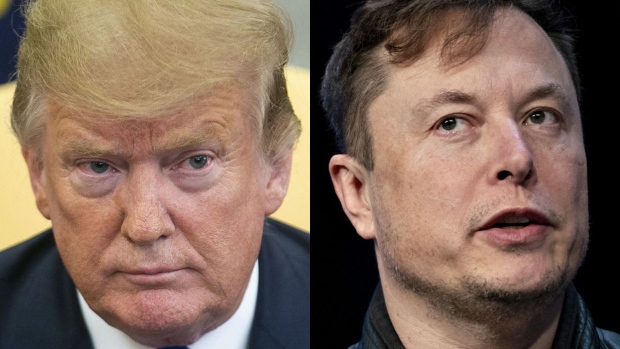 Mehmet Oz, celebrity physician and U.S. Republican Senate candidate for Pennsylvania, left, speaks during a 'Save America' rally with former U.S. President Donald Trump in Greensburg, Pennsylvania, U.S., on Friday, May 6, 2022. Trump is trying to rally his staunchest Pennsylvania Republican voters to Oz's side as the celebrity physician struggles to break loose from a crowded Senate primary field and provide the former president with his second consecutive victory-by-proxy of the early 2022 midterm election cycle. Photographer: Justin Merriman/Bloomberg , Bloomberg

(Bloomberg) -- The merger deal bringing Donald Trump’s media venture public carries a range of risks for its investors, including permission for the former president to resume tweeting about politics on rival social media platforms he has denounced like Twitter Inc.

Trump, who will be chairman of the combined company that will bear his name, is free to post on other sites about “political messaging, political fundraising or get-out-the-vote efforts,” according to a filing from Digital World Acquisition Corp. The firm is a publicly traded special-purpose acquisition company or SPAC that’s buying Trump Media & Technology Group.

The terms create an opening for Trump, who’s currently banned from platforms including Twitter, to return to the site. Trump has said he doesn’t plan to return, but last week, Elon Musk, the billionaire who has agreed to acquire Twitter, called the ban “foolish in the extreme” and said he’d reverse it.

Shares of Digital World have been volatile in recent months as daily downloads for Trump’s Truth Social platform ebbed, key executives resigned and investors weighed how Musk’s takeover of Twitter could impact the outlook. The SPAC rallied as much as 9.5% in Monday’s trading.

The filing shows that Trump is “generally obligated” to make social media posts on Truth Social first, and has to delay making the same post on different platforms for six hours. But it exempts messages related to politics, and points out that six hours may not be enough to ensure users read his posts on Truth Social.

“Thereafter, he is free to post on any site to which he has access,” the company said in the filing. “Thus, TMTG has limited time to benefit from his posts and followers may not find it compelling to use Truth Social to read his posts that quickly.”

The potential return to sites that the filing bashes as “woke” and “hostile” could adversely impact Trump Media investors, the company said. Risks range from Trump’s potential distraction, the prospect of him being forced to resign from the board and the inability to court loyal followers to the platform.

Trump Media also may face greater risks than its peers, which include “active discouragement of users, harassment of advertisers or content providers, increased risk of hacking of TMTG’s platform and increased stockholder suits.”

Other risks include lawsuits related to Trump himself and an ongoing SEC investigation into the deal.

The company and Trump signed a license agreement “wherein neither the personal nor political conduct of President Trump, even if such conduct could negatively reflect on TMTG’s reputation or brand or be considered offensive, dishonest, illegal, immoral, or unethical, or otherwise harmful to TMTG’s brand or reputation, shall be considered a breach of the license agreement.”

“TMTG expressly acknowledges the controversial nature of being associated with President Trump and the possibility of any associated controversies affecting TMTG adversely,” the company said.

Details surrounding the media venture had been scarce and the initial rollout of Truth Social was plagued by technical glitches. The companies now expect the deal will be completed in the second half of the year and deliver about $1.25 billion in net proceeds if no shareholders elect to redeem their stock. Investors in SPACs have the right to demand their money back if they don’t like the takeover target or the terms.