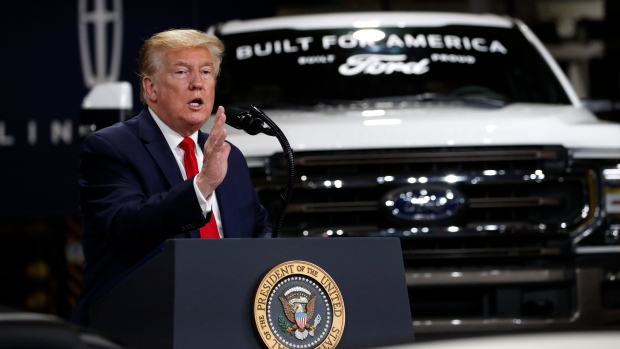 President Donald Trump speaks at Ford's Rawsonville Components Plant that has been converted to making personal protection and medical equipment, Thursday, May 21, 2020, in Ypsilanti, Mich. , The Associated Press

But he told reporters he had put on a mask in the “back area” of the plant in Ypsilanti, Michigan, and didn’t want to give them the “pleasure” of seeing him with it.

“I was given a choice,” he said. “And I had one on in an area where they preferred it, so I put it on. And it was very nice. Look, very nice. But they said they’re not necessary.” He added that he had also worn goggles.

He held up a dark colored mask bearing the presidential seal. Trump said he had been tested for the coronavirus earlier in the day and didn’t need to cover his face.

The U.S. Centers for Disease Control and Prevention has recommended wearing face coverings in public settings where social distancing measures are difficult to maintain, and experts on the president’s coronavirus task force have said masks are useful in preventing the spread of the virus from those who are unaware they have it.

Many companies continuing operations during the pandemic have instituted requirements that workers wear protective gear, including masks, while on the job, and Ford released a 64-page return-to-work playbook that states: “Face masks are required to be worn by everyone, in all facilities, at all times.”

The company said after the president’s visit was announced that it had shared details of its safety policies with the White House. Still, Ford ultimately opted to defer to the determinations of the White House, Rachel McCleery, a company spokeswoman, said Tuesday.

Michigan Attorney General Dana Nessel, a Democrat, said in an open letter Thursday that the president had a “social and moral responsibility” to take precautions to prevent the further spread of the virus. Nessel subsequently told CNN that if Trump “fails to wear a mask, he’s going to be asked not to return to any unclosed facilities inside our state.”“We are just asking that President Trump comply with the law of our state, just as we would make the same request of anyone else in those plants,” Nessel said.

Asked about his plans before he left the White House on Thursday, Trump was noncommittal, but said “I want to get our country back to normal.”

After a visit late last month to the Mayo Clinic in Minnesota, Vice President Mike Pence was criticized for disregarding clinic rules requiring face masks -- though the vice president has been spotted wearing a mask at some subsequent events, including a trip to a Florida nursing home on Wednesday.