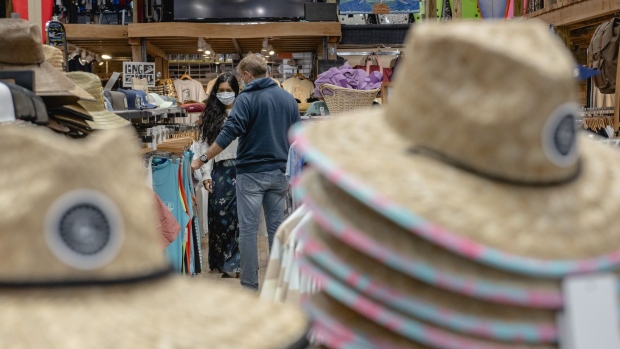 Shoppers wearing protective masks browse clothing at a store in Long Beach, New York, U.S., on Thursday, June 11 2020. Long Island officially entered Phase 2 of its reopening from the coronavirus pandemic Wednesday, with outdoor dining and some in-store retail stores are back in business for the first time in weeks. Photographer: Johnny Milano/Bloomberg , Bloomberg

​U.S. consumer sentiment climbed in early June by the most since 2016 as more states began to reopen their economies and employers restored jobs.

The University of Michigan’s preliminary sentiment index increased 6.6 points to 78.9, according to data Friday. The median projection in a Bloomberg survey of economists called for a gain to 75. Even with the improvement, the gauge remains well below pre-pandemic levels.

The gauge of current conditions advanced 5.5 points to 87.8 this month, while a measure of expectations jumped 7.2 points to 73.1.

The increase in sentiment highlights optimism that the reopening of the U.S. economy will restore jobs and help spur the spending needed to dig out of a deep recession. Still, two-thirds of respondents anticipated unfavorable economic conditions in the year ahead because of concerns about a resurgence in the coronavirus as well as lingering weakness in the job market.

“Despite the expected economic gains, few consumers anticipate the reestablishment of favorable economic conditions anytime soon,” Richard Curtin, director of the survey, said in a statement.

The university’s sentiment data are consistent with a weekly Bloomberg measure. The index of consumer comfort advanced in the first week of June to a six-week high as higher stock prices and the return to work for Americans continued to lift attitudes about personal finances, a report showed Thursday.

“It is likely that the recent rise in inflation expectations reflects a shift in consumer purchases from the full range included in the CPI to be more heavily focused on food purchases, which posted an annual gain of 4.8 per cent in May,” Curtin said.

The data also showed a growing political divide, with the increase in consumer sentiment concentrated among Republicans and independent voters. At the same time, overall confidence in government economic policies declined, with the share judging policies as poor at the highest level since President Donald Trump was elected.

“The damage done by this coronavirus to our economy has been extensive -- we haven’t yet dealt with the small business firms that are going to go out of business and the many households that haven’t made mortgage or rent payments in a while,” Curtin said on a Bloomberg conference call. These are what “consumers think the government needs to pay attention to,” he said.

The Michigan survey was conducted May 27 to June 10. The Labor Department reported last week that 2.5 million jobs were added in May as reopenings generated more economic activity. Even so, Federal Reserve Chair Jerome Powell cautioned on Wednesday that longer-term unemployment challenges may linger as a result of the pandemic.

The share of respondents who reported they expect their finances to improve in the next year rose to 42 per cent from 32 per cent, the university said. The gain was due to rising income, with an expected annual improvement of 1.3 per cent, up from 0.5 per cent.