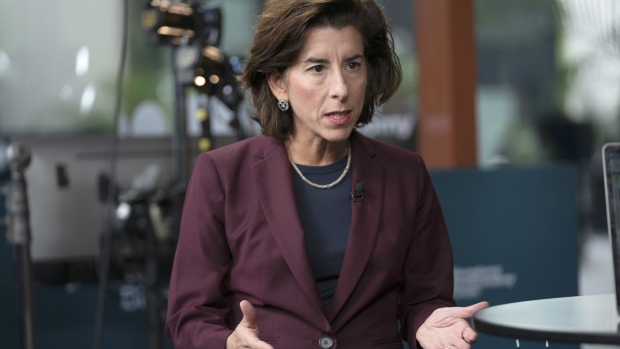 “It’s a priority for the president,” Raimondo, speaking in a roundtable discussion Thursday at Bloomberg headquarters in New York, said of deepening U.S. engagement with Asia. “America didn’t show up in that region for four years,” she said, alluding to the Trump administration’s record.

Raimondo said that her trip to Asia last month was designed to “assess appetite” for economic dialog, under the condition that President Joe Biden’s team isn’t planning to take up traditional trade talks. She underscored that rejoining the Comprehensive and Progressive Agreement for Trans-Pacific Partnership “as presented” is off the table.

“The demand for U.S. presence and the demand for U.S. reengagement was off the charts,” said Raimondo, who stopped in Singapore, Malaysia and Japan last month. What the administration envisions is a “new kind of economic framework for a new economy,” and the hope is to, “early in the new year, first quarter of next year, officially launch a process,” she said.

The framework will be “flexible,” with some countries perhaps not signing up to all of the elements, Raimondo said. She said the aim is to engage not just developed nations such as Japan, Singapore, Australia and New Zealand but also emerging economies such as Malaysia, Vietnam and Thailand.

“I would love 12 months from now to be coming back here with something signed saying we’ve made progress,” the Commerce chief said. She said the agreement may not “culminate” in something that would require approval by the U.S. Congress -- which is needed for traditional trade agreements. “It won’t be a trade deal, but it could be very powerful.”

Supply chains for critical goods including semiconductors are a particular focus, Raimondo said. The goal is “robust, long-term collaborations around supply chains” that addresses what has been a lack of coordination among producers and users, she said. On the domestic U.S. front, Raimondo cited the benefit of the government convening “stakeholders” at the same table to increase transparency and trust around supply chains.

The Democratic former governor of Rhode Island also said that she could see some non-American companies benefiting from the $54 billion of emergency appropriations to help bring semiconductor manufacturing back to the U.S. that Congress is now debating. The key is that the production is done in the U.S., she said.

“It is a problem for America that we are so reliant on Taiwan” for semiconductors today, Raimondo said.

Another element of the Asia economic framework is working to harmonize export controls to limit sensitive products that head to China “and other autocratic regimes,” Raimondo said. “The devil is deeply in the details” on export controls, she also said, because measures shouldn’t be “overly broad,” such that they deny revenue that companies need to plow into their research and development.

“If America puts export controls vis-a-vis China on a certain part of our semiconductor equipment, but our allies don’t do the same thing, and China can therefore get that equipment from our ally, that’s not effective,” Raimondo said.

It’s unclear whether what the Biden administration envisions meets the level of economic engagement that some Asian economies have called for. Japan and others have urged Washington to reconsider former President Donald Trump’s decision to pull out of the CPTPP deal, which had been the key economic pillar of a strategy to bolster U.S.-led opposition to China.

Singapore Deputy Prime Minister Heng Swee Keat said last week that while “over the past decades, the U.S. security presence has brought stability and peace in the region,” for that to stretch “into the next decades, the U.S. cannot afford to be absent from the region’s evolving economic architecture.”