The median price for a single-family home in the U.S. rose the most on record in the first quarter, as buyers fought over a dearth of inventory, according to the National Association of Realtors.

Prices jumped 16.2 per cent from a year earlier to a record high of US$319,200. The growth eclipsed the 14.8 per cent rate in the fourth quarter, which was the highest in data going back to 1989, the group said in a report Tuesday. 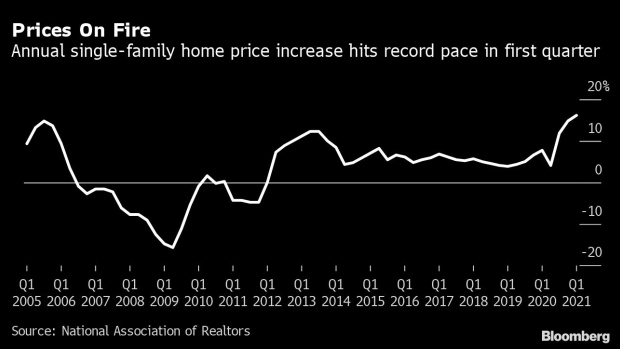 Americans are taking advantage of low mortgage rates to buy homes in the suburbs and in less-costly cities across the country, where supplies are tight and bidding wars are common.

“The record-high home prices are happening across nearly all markets, big and small, even in those metros that have long been considered off-the-radar in prior years for many home-seekers,” said Lawrence Yun, the group’s chief economist.

The metropolitan area with the largest increase from a year earlier was Kingston, New York, a picturesque Hudson Valley town about 90 miles (145 kilometers) north of Manhattan. Prices there soared 35.5 per cent. Fairfield County, Connecticut -- home to Greenwich -- followed, with 34.3 per cent.

Of the 183 metro areas measured by the group, 163 had double-digit price gains, up from 161 in the fourth quarter. Springfield, Illinois, was the only area where prices fell.