U.S. Fed is going to take this as slow as possible with tapering bond purchases: Bill Baruch

U.S. job growth picked up in May -- along with worker pay -- and the unemployment rate fell, signaling firms are making some progress filling a record number of openings as the economy powers up.

Payrolls increased by 559,000 last month after a revised 278,000 gain in April, according to a Labor Department report Friday. The median estimate in a Bloomberg survey of economists was for a 675,000 rise. The jobless rate dropped to 5.8 per cent, while the labor participation rate was little changed. 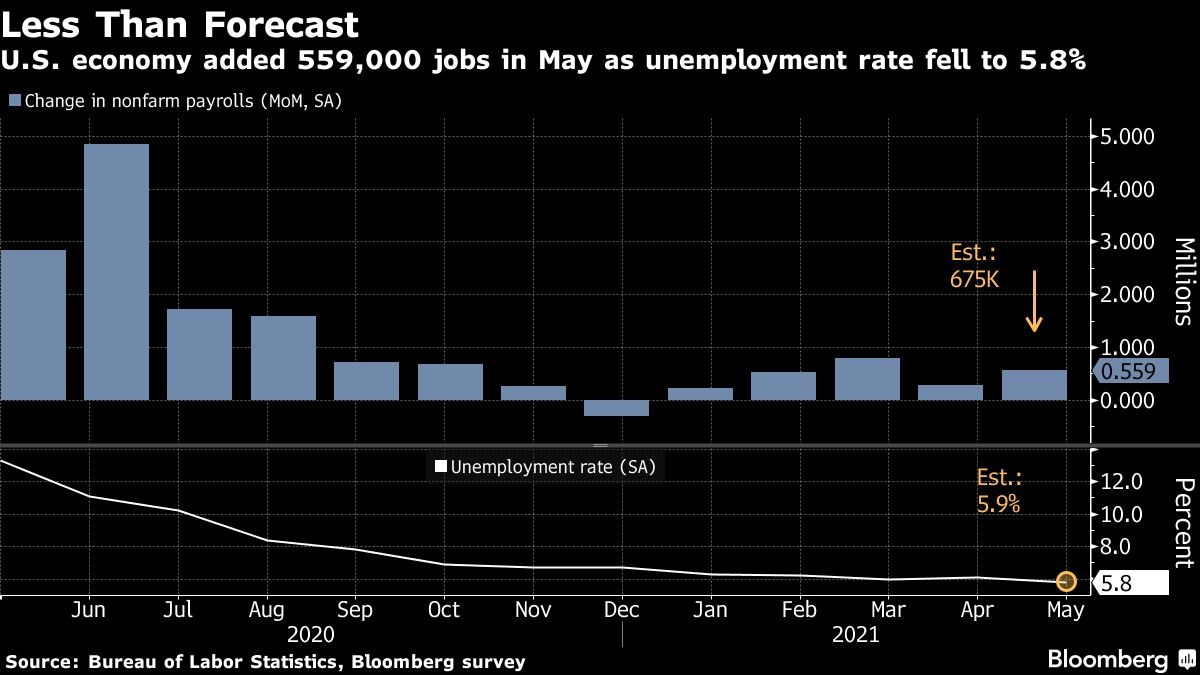 Employers are pressing to get headcounts in line with a resurgence in demand. May was an inflection point in the reopening of the economy because of increased coronavirus vaccination rates, more social activity and fewer business restrictions across most of the U.S.

Restaurants and bars reported the largest payrolls increase, with a gain of 186,000 jobs, the Labor Department’s report showed.

The payrolls gain still leaves the U.S. labor market 7.6 million jobs short of pre-pandemic levels. A broader improvement in the labor market requires faster job growth among service providers, like the leisure and hospitality industry, that have suffered a more lengthy disruption from the health crisis.

The number of long-term unemployed, those out of work for 27 weeks or longer, declined by 431,000 in May, the most since 2011 and suggesting that Americans who lost their jobs early in the pandemic are finally returning to work.

The data may help assuage concerns at the White House that the labor market’s recovery had stalled and that policies such as extra unemployment benefits were keeping significant numbers of workers at home. More than 20 states have decided to end federal supplemental jobless payments early. At the same time, the uneven progress across industries suggests that challenges remain.

“It will take at least several months to resolve some major frictions and allow for more hefty gains in payrolls, commensurate with robust reopening demand.”

The shortfall in the level of payrolls, along with views that recent inflationary pressures will prove temporary, helps explain why Federal Reserve officials will hold the line on their ultra-easy monetary policy.

“Remaining steady in our outcomes-based approach during the transitory reopening surge will help ensure the economic momentum that will be needed as current tailwinds shift to headwinds is not curtailed by a premature tightening of financial conditions,” Fed Governor Lael Brainard said Tuesday.

In one sign of shifting demand, employment at grocery stores decreased for a third month as more people return to dining out.

The labor force participation rate, a measure of those working or looking for work and closely watched by the Fed, was 61.6 per cent in May after 61.7 per cent. It remains well below the 63.3 per cent before the pandemic. The employment-population ratio ticked up to 58 per cent.

Adding workers is “one of the most important issues because it is very difficult, particularly here in the U.S., to get labor,” Christopher Nassetta, chief executive officer at Hilton Worldwide Holdings Inc., said on the company’s May 5 earnings call. “You just can’t get enough people to service the properties.”

Average hourly earnings rose 0.5 per cent in May from a month earlier, to US$30.33, the jobs report showed.

“The data for the last two months suggest that the rising demand for labor associated with the recovery from the pandemic may have put upward pressure on wages,” the Labor Department said in a statement.