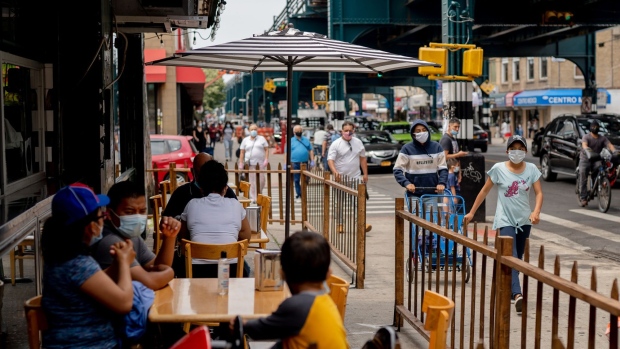 Pedestrians pass in front of customers sitting outside at a restaurant in in the Queens borough of New York. , Amir Hamja/Bloomberg

The number of Americans applying for jobless benefits resumed its decline, signaling a gradual improvement in the battered labour market.

Jobless claims in regular state programs decreased by 33,000 to 860,000 in the week ended Sept. 12, which coincides with the reference period for the government’s monthly jobs report, according to Labor Department figures released Thursday. Continuing claims, the total number of Americans on state benefit rolls, fell by almost 1 million, to 12.6 million, in the week ended Sept. 5.

Economists expected initial claims of 850,000 and continuing claims of 13 million, according to median estimates in a Bloomberg survey.

The decline in the number of Americans seeking financial help after losing work -- following a slight increase in the prior week -- is a welcome sign that the economic rebound is still grinding forward despite a struggle to contain the coronavirus.

At the same time, overall claims remain historically high, and the continuing stalemate over a new round of federal stimulus is squeezing millions of people after supplemental benefits expired in July and another temporary program started to run out of funds.

Additional stimulus is “on life support for sure and if we’re not getting any additional benefits for households and replacement of lost wage and salary income, it does look like the pace of improvement is certainly going to slow,” Michael Gapen, chief U.S. economist at Barclays Plc, said on Bloomberg Television.

Gapen also pointed to retail sales data out Wednesday as signaling “a lot less momentum” in the economy heading into the fourth quarter. 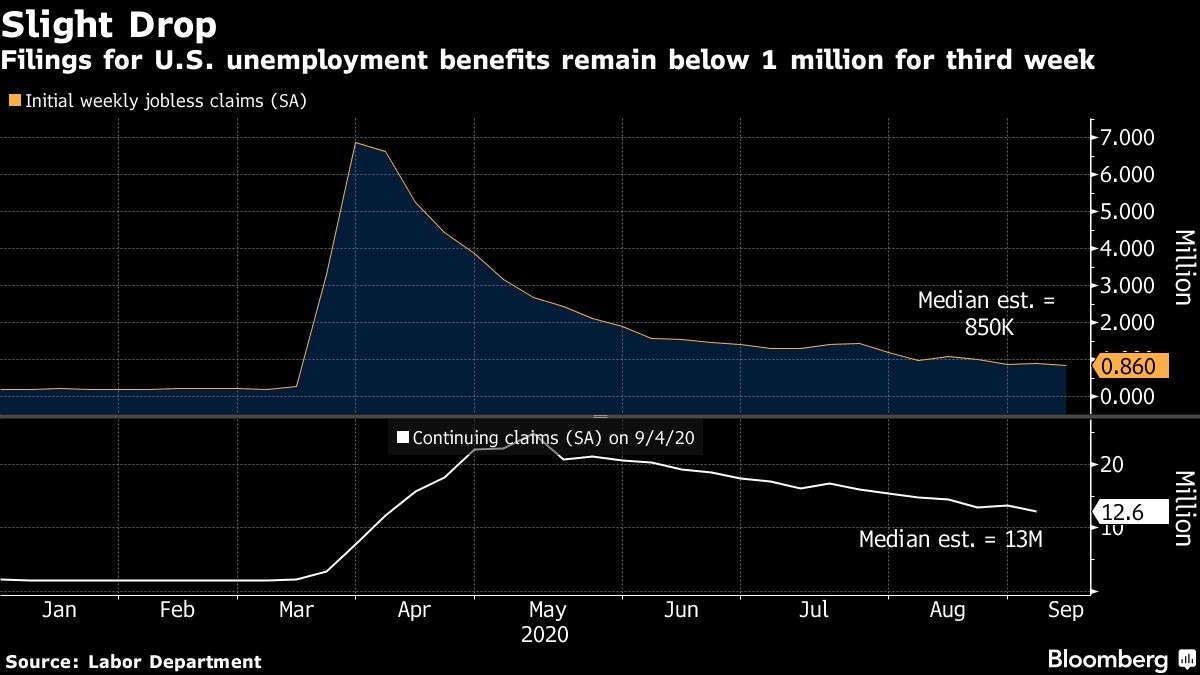 One caveat with the latest numbers is that the week included the Labor Day holiday, and the claims figures tend to be more volatile around holidays. On an unadjusted basis, state initial claims fell by about 76,000 to 790,000.

U.S. stocks fell at the open, remained lower following the data, while 10-year Treasuries and the dollar were higher.

A separate report Thursday showed U.S. home construction starts fell more than forecast in August, representing a pause in momentum for a housing market that’s been a key source of fuel for the economy. Also, a measure of manufacturing in the Philadelphia region cooled slightly in September while continuing to signal expansion.

Federal Reserve Chairman Jerome Powell said Wednesday that while the central bank welcomes the drop in unemployment over the last four months, the jobless rate remains elevated at 8.4 per cent and “we will not lose sight of the millions of Americans who remain out of work.” He spoke after the central bank signaled it would keep interest rates near zero for at least three more years.

Another positive sign in Thursday’s report: reported filings in a federal program called Pandemic Unemployment Assistance decreased for the first time in five weeks, to about 659,000 from 868,000, according to unadjusted figures. This program is available for those not usually covered in regular state programs, including the self-employed and gig workers.

The drop in state claims was broad-based. California and Texas led the improvement with declines of about 13,000 and 16,000 respectively on an unadjusted basis. Louisiana, Florida, and Georgia also posted sizable declines.

An even broader figure -- which includes continuing claims for benefits across all programs including PUA and state rolls -- increased to 29.8 million in the week ended Aug. 29. The number, though, has been inflated by states counting multiple weeks of PUA claimed as different individuals, and Powell cautioned Wednesday about taking “much signal about the particular level” of PUA claims.

Powell said that in general, the jobless claims data indicate that the labor market “has improved but it’s a long, long way from maximum employment and it will be some time getting back there.”

Also, some of the improvement in continuing claims in the coming weeks and months may actually be a reflection of people exhausting regular benefits and rolling onto Pandemic Emergency Unemployment Compensation. In the week ended Aug. 29, almost 105,000 more people were claiming PEUC benefits than in the prior week.