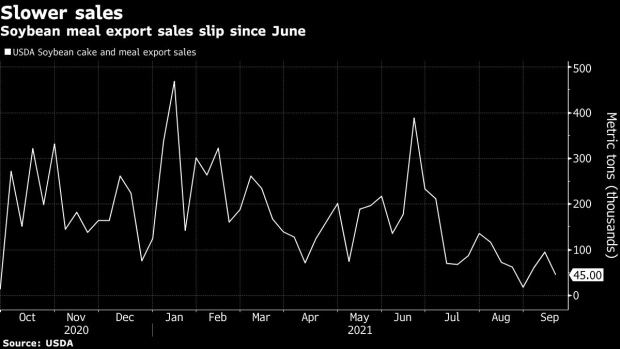 (Bloomberg) -- Shipments from a U.S. West Coast terminal that handles almost 20% of the nation’s soybean meal exports have been curbed while damage from a crane collapse earlier this month is repaired, marking the latest setback to global trade flows.

A loading boom at farm cooperative Ag Processing Inc.’s export facility in Aberdeen, Washington, fell Sept. 1 as a bulk carrier was being loaded, according to a person familiar with the matter and a shipping agent notice to customers seen by Bloomberg. The damage could take months to repair, according to the notice.

Omaha, Nebraska-based Ag Processing declined to comment on the matter.

The disruption puts yet another kink in global supply chains with the U.S. still reeling from the export chaos caused by Hurricane Ida in the Gulf of Mexico, home of America’s busiest agricultural port. The terminal in Grays Harbor handles the bulk of America’s soy meal shipped to Asia from the West Coast.

It’s certain to put big importers like the Philippines, which needs the product to feed livestock, in a bind just as soy processing slows in China as well. Plants in a key region in China were ordered to shut down for at least a week as the Asian country contends with a severe energy crisis.

Soybean meal futures in Chicago have fallen 1.9% this month.

A ship waiting to load at Ag Processing’s facility when the crane collapse occurred was diverted to a grain terminal in Longview, Washington, operated by EGT LLC, according to the notice.

The dock shutdown also affects exports of dried distillers grains, a byproduct of ethanol production that’s a key ingredient in feed for beef cattle and dairy cows. The U.S. harvest season is kicking off, a time when exports of soybeans and soy products typically increases.

AGP’s facility is especially important because soy meal isn’t as easily shipped from terminals focused on grains like corn, as it flows differently and can cake up. The bulky commodity also isn’t meant to sit around.

“People hate to store meal,” O’Neil said. “It’s not something you can store for months.”