US stocks rose for a second day in a row, with megacaps catching bids as investors digested weak data on New York manufacturing and the Chinese economy. Treasuries gained with the dollar, while commodities from oil to iron ore tumbled.

The S&P 500 closed near highs of the day, reversing losses of as much as 0.5 per cent , with only energy and materials sectors ending in the red. The tech-heavy Nasdaq 100 outperformed, with Tesla Inc., Apple Inc., Microsoft Corp. and Nvidia Corp. leading gains. Treasury yields declined and the bond curve remained deeply inverted, pointing to potential risks of a US recession as the Federal Reserve tightens monetary policy.

US stocks are coming off a fourth straight weekly gain, the longest run this year, with sentiment buoyed by signs of slowing price pressures that stirred hopes of a shift by the Fed to less aggressive rate hikes and a gradual slowdown in the economy. Still, the rally has left market breadth looking stretched with stocks vulnerable to a pullback.

“The magnitude of this bear market rally has surprised many, including us,” Morgan Stanley strategists including Michael Wilson wrote in a note. “In our view, it’s been driven by a combination of better-than-feared 2Q earnings (although revisions/price came down into the quarter), light positioning and continued hope for a less hawkish Fed path.” 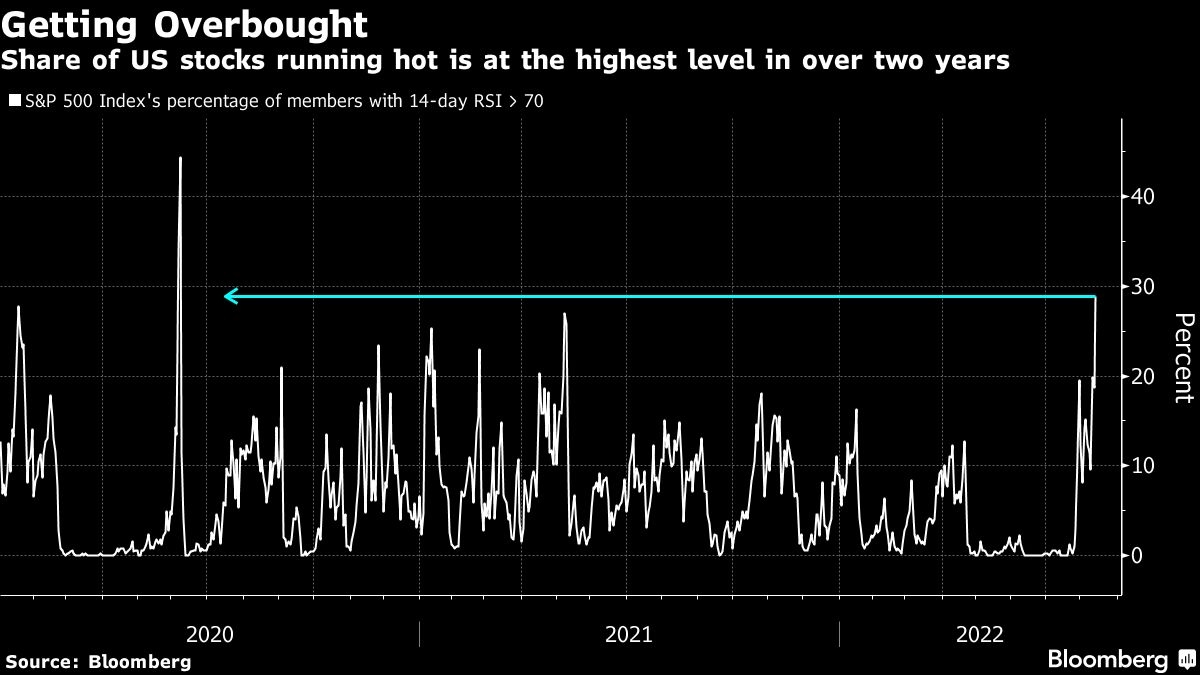 In corporate news, activist investor Dan Loeb said he acquired a stake in Walt Disney Co. and called for sweeping changes. The shares rose for a fourth day to the highest since April. Big-box retailers take center stage this week with Walmart Inc., Home Depot Inc. and Target Corp. due to report earnings.

“Traders seemingly embraced the downtick in inflation last week and pushed stocks to their highest levels since early May,” Chris Larkin, managing director of trading at E*Trade from Morgan Stanley, said in a note. “Though with inflation still unsustainably high, and the Fed needing to continue to hike interest rates, the possibility of an inflation ‘head fake’ after last week’s data remains.”

A gauge of New York state manufacturing activity plunged by the second-most in data back to 2001, with sharp declines in orders and shipments indicating an abrupt downturn in demand, a report showed Monday.

Meanwhile, data showed China’s July retail sales, investment and industrial output missed economists’ estimates, and in the euro area, the risk of a recession has reached the highest level since November 2020, according to economists polled by Bloomberg.

Oil shed more than 3 per cent , while iron ore, copper and other metals declined amid mounting concerns that China’s sluggish recovery will curb demand for raw materials. Gold retreated below US$1,800 an ounce and Bitcoin hovered above US$24,000.

“We would caution investors not to get too bulled up or chase this rally,” Solita Marcelli, chief investment officer Americas at UBS Global Wealth Management, said. “There is a decent risk that the Fed has to hike rates more than we and the market are currently expecting, a possibility that would quickly cool the warming sentiment. That would also increase downside risks to growth, which are already prevalent.”