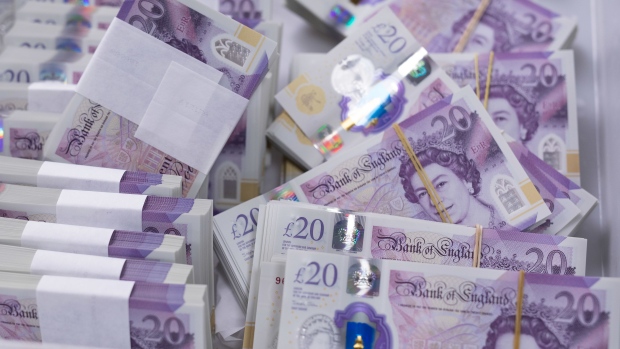 Bundles of new polymer British 20-pound banknotes sit in a basket in a warehouse operated by G4S Plc in London, U.K. on Thursday, Feb. 20, 2020. Political stability in the U.K. is keeping the pound steady, while rate-cut bets and falling hedging costs are luring borrowers. Photographer: Jason Alden/Bloomberg , Bloomberg

(Bloomberg) -- Centrica Plc accused the UK of covering “a mess up worth billions of pounds” to taxpayers as it tried to rush through the sale of collapsed Bulb Energy Ltd.

The decision to sell Bulb to Octopus Energy Ltd. is being challenged by Centrica unit British Gas, Iberdrola SA’s Scottish Power and EON SE over the lack of transparency and what the subsidies on offer to potential bidders were. The group of rivals asked for a judicial review of the process days after a London judge set a date of Dec. 20 for the deal to complete.

The cost of Bulb’s collapse is expected to balloon to £6.5 billion as high energy prices lift the total bill that will be shouldered by British households, according to the Office for Budget Responsibility.

The “uber urgency” of the court has been deliberate, Paul Harris a lawyer for British Gas said in a London court on Tuesday. Bulb went into administration last November when the regulator’s price cap forced it to sell energy at a loss when wholesale prices soared. Teneo Inc. was appointed to run the company with taxpayer money until a buyer could be found. It was announced that Octopus would take on Bulb at the end of October.

Judge Jonathan Swift ruled that the “least worst option” was to set a judicial review date for early next year, although he said it could lead to uncertainty. The completion “date might need to be unpicked,” he said.

The UK government, which has supported Bulb in the biggest bailout since the financial crisis, approved the deal with Octopus in order to protect consumers and taxpayers. The sale is being completed through a process called an Energy Transfer Scheme which will transfer the relevant assets of Bulb into a new separate entity.

“If the claimants had been told subsidies were on offer, that would fundamentally change the landscape in what they were participating in the bidding process,” Harris said.

Lawyers for Octopus said that all legal issues needed to be resolved as quickly as next week to “achieve certainty and finality” for the companies involved. The three energy firms said a hearing to review the process should take place in February.