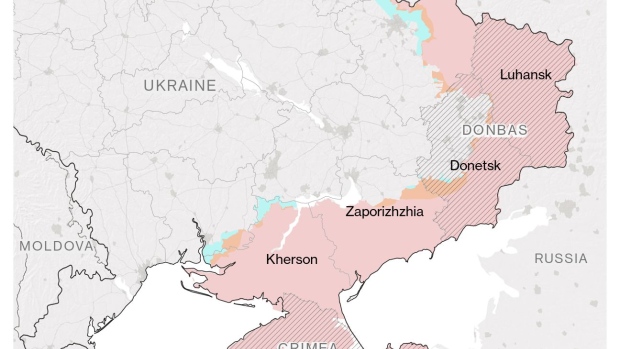 (Bloomberg) -- Brave Commander, the first vessel chartered by the UN’s World Food Program since the reopening of Ukraine’s Black Sea ports under a safe-transit agreement, has departed with a 23,000-ton cargo of wheat for famine-struck Ethiopia.

Ukraine’s military is focusing on a counteroffensive in the southern Kherson region. In recent days, Kyiv’s forces have attempted to render inoperable key bridges across the Dnipro River that Russian troops used to transport supplies. The UK said Moscow’s forces are now probably reliant on hazardous pontoon ferry crossings across the wide river for ground resupplies.

The Ukraine army’s southern operational command said on Facebook that it destroyed Russian ammunition depots in Nova Kakhovka, upriver from Kherson, and Muzikivka. The strikes couldn’t be verified.

Explosions around Nova Kavhovka in the Kherson region were suspected to be the detonation of Russian ammunition reported by the army’s southern command. Fierce fighting continues in Ukraine’s eastern Donbas region. The defense ministry said particularly heavy fighting has focused on Pisky, a village near Donetsk Airport. The area has been on the front line of the Donbas line of command since 2014, it said. Around Slovyansk, in Donetsk, Russian forces tried to break through defenses in the Dolyna area, but were repelled. Russian reconnaissance around ​​Pytomnyk in the north was forced to retreat after suffering losses, according to a statement from the ministry on its Facebook page.

The Brave Commander arrived in port on Friday and was scheduled to load 23,000 tons of wheat for a part of Africa that’s on the verge of famine.

“This is the first among many steps, but a very big one we need to make to tackle the global food crisis,” Marchenko said on his Telegram-channel.

“We are fighting for” International Atomic Energy Association representatives to visit the plant, Zakharova said on Sunday, according to the state-run Tass news service.

A Russian diplomat said a mission to Zaporizhzhia led by IAEA chief Rafael Grossi couldn’t take place before the “end of August or early September,” according to an interview with the Izvestia newspaper published Friday.

Ukraine again struck the Antonivskyi Bridge over the Dnipro River on Saturday night, said Natalia Humenyuk, a military spokesperson, as it pursues its goal of cutting off Russian supply routes to the Kherson region.

“It means that heavy machinery and the transportation of ammunition reserves have been extremely complicated, even disabled,” she said on local television.

Disabling bridges has become a major strategy as Ukraine gears up for a counteroffensive against Russian-occupied territories by cutting off Moscow’s supply routes. The UK has said Russian troops are now relying on pontoon crossings to get across the Dnipro. The Antonivskyi Bridge is almost a mile long.

German gas storage facilities have reached a fill level of 75%, two weeks ahead of schedule, according to the country’s regulator. “The first stage goal has been reached”, Klaus Mueller, president of Germany’s federal network agency, said on Twitter.

Russia has for weeks pumped natural gas through the Nord Stream 1 pipeline to Germany at only about 20% of capacity. Russia’s Gazprom has cited technical reasons, while the German government considers this to be a pretext.

The merchant ship Razoni, which on Aug. 1 was the first to sail under a safe-transit agreement for Ukraine’s grain exports, has arrived at a Syrian port, Reuters reported. Its 26,000-tonne corn cargo was earlier rejected by Lebanon.

The Sierra Leone-flagged vessel has arrived in Tartus, Syria, Reuters said. It has been shown as “out of range” by the tracking website marinetraffic.com for two days.

The cargo’s initial Lebanese buyer cited a five-month delay in the delivery. The Razoni docked for a few days last week at Mersin, Turkey.

As it plans a Kherson counteroffensive, Kyiv’s forces are focused on disrupting Russian ground lines of communication, or GLOCs, on the right bank of the Dnipro River, the Institute for the Study of War said.

If all three southern bridges across the Dnipro are out of service for a length of time, Moscow’s forces on the west bank will likely lose the ability to defend themselves against even limited Ukrainian counterattacks, ISW said.

“Every Russian soldier who either shoots at the plant or shoots under the cover of the plant must understand that he is becoming a special target for our intelligence and secret service, for our army,” Zelenskiy said via his Telegram channel.

Ukraine’s Defense Ministry said Saturday that Moscow’s troops continued shelling in the vicinity of Zaporizhzhia. Russia has blamed Ukraine for the shelling.