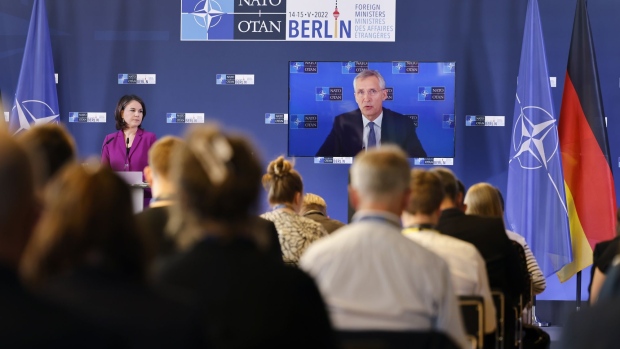 (Bloomberg) -- Natural gas prices extended declines on Monday with the European Commission preparing to set out guidance on how companies can make payments to Russia without breaching sanctions and keep gas supplies flowing.

In the new advice, Europe is set to tell companies they should make a clear statement that they consider obligations fulfilled once they pay in euros or dollars, in line with existing contracts. They can open an account at Gazprombank as ordered by the Kremlin, but European Union’s executive arm may not spell out whether buyers can also open an account in rubles.

Finland and Sweden are set to deliver their formal applications at NATO’s headquarters in Brussels this week, with Secretary General Jens Stoltenberg that Turkey won’t block their membership, despite its concerns about their dealings with Kurdish groups.

Borrell Sees No Guarantee of Deal on Oil Sanctions (9:20 a.m.)

Josep Borrell, the European Union’s foreign policy chief, said he can’t be sure that the bloc will be able to resolve a stalemate with Hungary that is holding up sanctions on Russian oil as part of a proposed sixth package of measures.

“I cannot ensure that this is going to happen, because positions are quite strong,” Borrell told reporters ahead of a meeting of EU foreign ministers in Brussels. “But I think that if we understand the particular situations of some member states, and all of us make an effort in order to present a united front against Russia, we will succeed.”

Benchmark gas futures in the Netherlands fell as much as 3% on Monday, extending Friday’s 9.2% decline, following Bloomberg’s report on EU plans for updated advice on how to pay Russia.

Russia’s new rubles-for-gas payment system has been in the focus of traders for weeks, with utilities scrambling to define how they will close transactions in compliance with Russia’s new system -- that would involve opening two accounts at Gazprombank, one in euros or dollar and another in rubles -- without breaching European sanctions against Russia.

Russian natural gas flows crossing Ukraine are expected to be lower Monday, based on shipment orders, while supplies via Nord Stream are stable.

Russian gas shipments to Europe via Ukraine were curtailed on Wednesday after a key cross-border entry point was put out of service because of troop activity on the ground, according to Kyiv.

The Central Research and Development Automobile and Engine Institute, known as NAMI, which reports to Russia’s industry ministry, will receive the stake while Renault also sold its car plant near the capital to a Moscow City entity, the company said Monday.

The carmaker has the option to buy back its 68% interest in Lada-maker AvtoVaz during the next six years. Renault confirmed it will take a writedown of the value of its operations in Russia -- its second biggest market -- of 2.2 billion euros ($2.4 billion), including goodwill, at the end of last year.

The market has been gripped by a tumultuous period of trading since Russia’s late-February invasion of Ukraine and the Covid-19 resurgence in China. The war has boosted the cost of food and fuels, with surging US retail gasoline and diesel prices helping fan the fastest inflation in decades.

Germany plans to stop importing Russian oil by the end of the year even if the European Union fails to agree on an EU-wide ban in its next set of sanctions, government officials said.

Efforts to seal deals with alternative suppliers are progressing at the chancellery in Berlin and the government is confident it can solve remaining logistical problems within the next six to seven months, according to the officials, who spoke on condition of anonymity.

With European Union foreign ministers meeting in Brussels on Monday to discuss the next round of sanctions, EU diplomats have floated a delay in the phased-in oil ban after Hungary objected, saying the step would be too damaging to its economy.

NATO members rallied around Finland and Sweden after they announced plans to join the alliance, marking another dramatic change in Europe’s security architecture triggered by Russia’s war in Ukraine.

Gathering in Berlin over the weekend, most NATO foreign ministers embraced the bloc’s northern enlargement, a process that requires unanimity among the 30 allies. The one country to voice concerns was Turkey, with Foreign Minister Mevlut Cavusoglu unhappy that Finland and, particularly, Sweden have had relations with Kurdish militants who have been active in eastern Turkey.

Read more: NATO Prepares to Add Finland and Sweden to Its Northern Defenses

Sweden to Send Envoys to Turkey on NATO Membership (7:44 p.m.)

Sweden will send a delegation of diplomats to Ankara for talks this week, after President Recep Tayyip Erdogan voiced opposition to allowing Sweden and Finland as NATO members.

“We are interested in solving this situation,” Sweden’s Foreign Minister Ann Linde said. “I think you should try to find a good solution that makes both parties satisfied.”

While Sweden and Finland have strong support from a large majority of NATO members, Linde acknowledged that other issues may arise.

Bloomberg reported Saturday that the EU has developed a solution to avoid a sanctions breach.