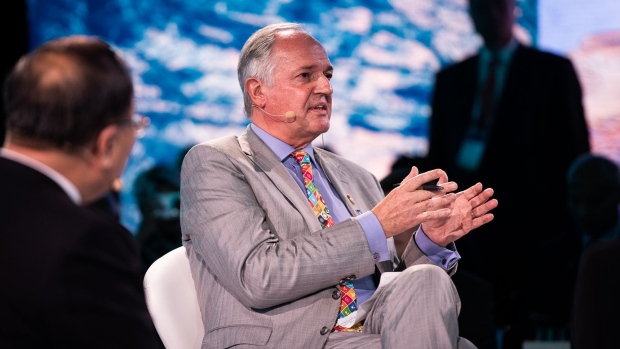 Paul Polman at the One Planet Summit in New York on Sept. 26. , Bloomberg

Paul Polman, the Dutchman who ran Unilever for almost a decade with a social slant, will push further in that direction now that he’s leaving -- creating a group to help combat poverty and climate change.

The foundation and corporation, called Imagine, will work with companies to press for meeting global goals for sustainable development. The 62-year-old executive will invest an unspecified amount of his own funds.

“The imperative to eradicate poverty and inequality and stem runaway climate change has never been more acute,” Polman wrote in an email to former colleagues and business contacts detailing his new project. What’s more, “we still miss the collective sense of urgency to move at scale and speed.”

Polman this week ended a nearly decade-long tenure at the consumer-goods group during which he crisscrossed the world to meet with heads of state and form alliances with non-profit groups to promote capitalism with a feel-good twist. He directed Unilever to install toilets in Africa through its Domestos brand and encouraged Asian schoolchildren to wash their hands -- using the company’s Lifebuoy soap -- to reduce disease spread.

“Even a company like Unilever can only do so much,” he wrote. “We have a fight against the clock here.”

Polman said he regards the private sector as the “main engine for change.” Valerie Keller and Jeff Seabright, Unilever’s chief sustainability officer, are co-founders of Imagine.