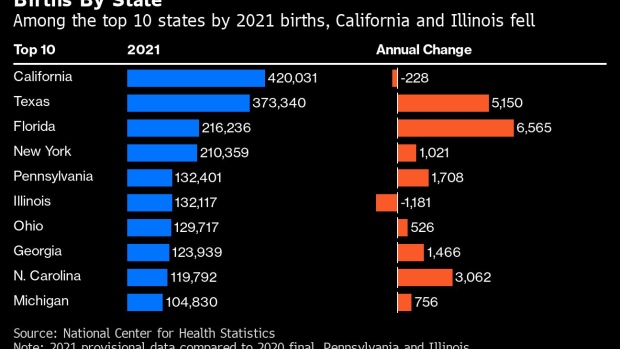 (Bloomberg) -- The US saw the first increase in the number of births last year since 2014, after a pronounced drop during the shutdowns of the first year of the pandemic that disrupted much social and economic activity.

The total number of births rose to 3.66 million in 2021, up from 3.61 million the year before, provisional data released by the National Center for Health Statistics showed Tuesday. Last year’s 1% gain marked a big turnaround from the 3.8% drop in 2020, which had outpaced the average 2% annual decline over the 2014-20 period.

By race, births among White women rose 2%, while other racial groups saw declines last year. Black women saw a 2% drop in births compared with 2020, with 3% falls for Asians and for American Indian or Alaska Native people. Hispanics, of any race, also saw a 2% rise.

Women in their late 30s saw the biggest jump in birth rates last year, with that group seeing a 5% increase from 2020.

Three states -- California, Texas and Florida -- accounted for almost 28% of births across the nation last year.