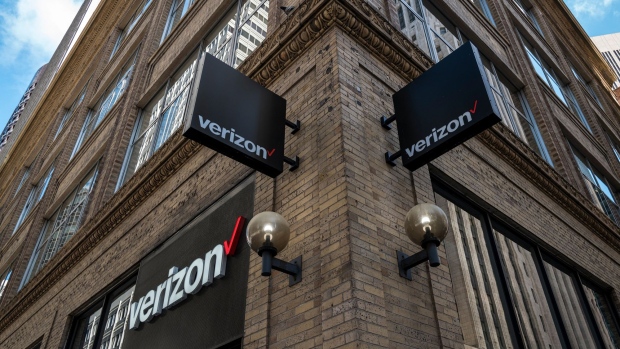 Signage is displayed outside a Verizon Communications Inc. store in San Francisco. , Bloomberg

Verizon Communications Inc. exceeded Wall Street profit estimates and raised its full-year earnings forecast, another sign that the company’s focus on mobile and broadband network services is helping it weather the Covid-19 pandemic.

The largest U.S. wireless carrier raised its forecast for full-year profit growth to a range of flat to 2 per cent, compared with the range of a 2 per cent decline to a 2 per cent rise that the company expected three months ago. Analysts were predicting a 1 per cent drop in 2020 earnings per share, excluding some items. Verizon added 283,000 new monthly phone subscribers, missing the average estimate of 317,970 from analysts.

While still muted by a weak economy, demand for wireless service remained steady, helping Verizon counter lower revenue from its stores, delays in bill payments and other effects of the pandemic. The company said Covid-19 knocked 5 cents off its adjusted earnings, compared with 14 cents in the second quarter.

Phone sales could be a bright spot for the holidays after Verizon shared the virtual stage as launch partner for Apple Inc.’s 5G iPhones. Like its peers, Verizon is giving away iPhone 12s to new customers who sign up for higher-priced unlimited plans.

In contrast to AT&T Inc.’s expansion into film and TV, Verizon opted not to pursue a major media acquisition and instead has partnered with media companies like Walt Disney Co. With a one-year promotion offering the Disney+ streaming service ending next month, Verizon is hoping to lure customers into top-tier unlimited plans by giving away a bundle of Disney+, Hulu and ESPN+.

On the broadband front, Verizon saw a surge in demand for its Fios home internet service, adding 139,000 new subscribers, or 144,000 including business customers. That exceeded the 27,000 analyst estimate.