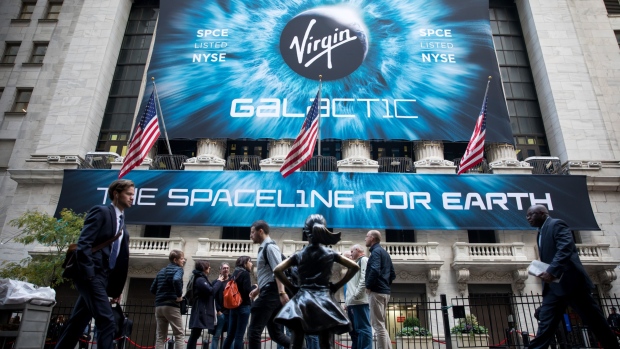 Richard Branson’s Virgin Galactic Holdings Inc. may close at another record on Friday after hitting new highs every day this week, but bearish bets are climbing too.

The space-tourism company told investors last night that the spaceship VSS Unity successfully completed another test flight during its relocation to New Mexico and was on track for the final stages of its test-flight program. The New Mexico-based company is gaining for the sixth day and has climbed about 45 per cent during this latest rally.

The Branson-founded company will compete against rivals like Elon Musk’s Space Exploration Technologies Corp. and Jeff Bezos’s Blue Origin LLC to get the space tourism market off the ground this year.

None of that has deterred short sellers, who have racked up US$388 million in bearish bets against roughly 31 per cent of Virgin Galactic’s free float, according to financial analytics firm S3 Partners. Shorts are down roughly US$214 million in mark-to-market losses since November, including a US$10 million loss today, according to Ihor Dusaniwsky, managing director of predictive analytics at S3.

“This is not a very crowded short although with a stock borrow fee of just over 12 per cent, there is tightness in the stock loan market which means there is not an unlimited supply of borrows available,” Dusaniwsky said in an email. He added that “if short selling increases again, rates will go up and it will be more difficult to get in the name.”