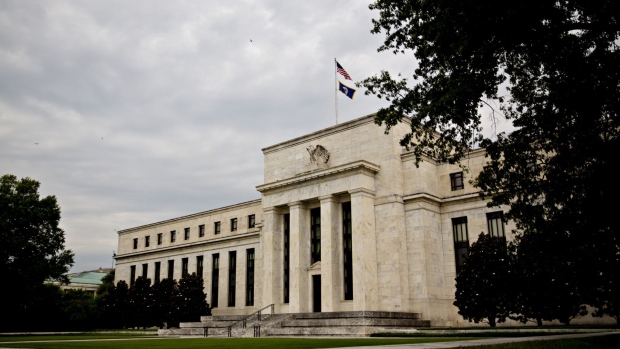 The Marriner S. Eccles Federal Reserve building stands in Washington, D.C., U.S., on Tuesday, Aug. 13, 2019. The Trump administration announced today it will delay until mid-December the 10% tariff on some Chinese products on many holiday-shopping lists, with the president acknowledging that the levies would have hurt consumers. Photographer: Andrew Harrer/Bloomberg , Bloomberg

(Bloomberg) -- The sole member of the congressional commission charged with policing the massive coronavirus relief program has asked the Federal Reserve for information on the trillions in emergency loans that the central bank plans to extend to businesses.

Bharat Ramamurti said in a letter to Fed Chairman Jerome Powell that the bank had not “announced what information it will publicly release” about its dealings with private companies, or even whether it would release the names of individual beneficiaries.”

“I write to respectfully request that the Federal Reserve publicly release detailed and timely information about each individual transaction,” Ramamurti said in a four-page letter, which was released on Wednesday and includes a long list of bullet points and requests. “The public deserves to know which companies are receiving taxpayer-backed lending through the Fed and on what terms.”

The oversight panel was created at the insistence of congressional Democrats during negotiations with the Trump administration over the $2 trillion coronavirus stimulus legislation., known as the Cares Act.

The commission is supposed to have five members, but two weeks after the legislation was enacted, only Ramamurti, a former aide to Senator Elizabeth Warren of Massachusetts has been appointed, by Senate Minority Leader Chuck Schumer.

The commission doesn’t have staff even though it’s supposed to issue its first report within 30 days of Treasury’s first distribution of funds. And it’s required to make reports every 30 days after that.

Aides to Pelosi, McCarthy and McConnell declined to disclose when the appointments might be announced, or why they haven’t been already.

That timeline was triggered on April 9 when the Federal Reserve, in coordination with the Treasury Department, announced the rollout of the “Main Street Lending Facility,” a pillar of the government relief effort that will provide loans to companies with up to 10,000 employees or as much as $2.5 billion in annual revenue.

“I’m eager for the commission members to be named and for us to get up and running,” Ramamurti said in an interview earlier this week.

He reflected the urgency of beginning the oversight process in his letter to Powell.

“Money is moving around in the blink of an eye,” he wrote, “and it’s not at all clear what it all means and who it’s helping.”