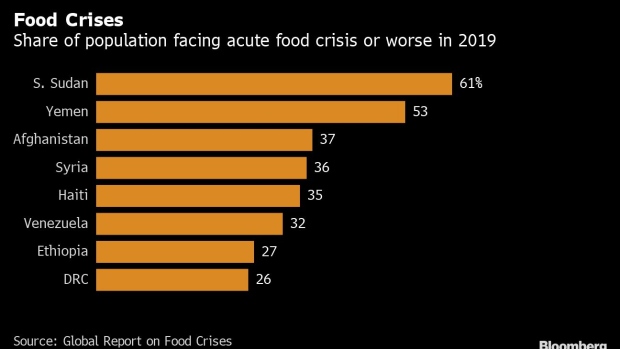 The threat of social and political unrest around the world is rising as the coronavirus crisis fuels discontent amid food shortages, job losses and lockdowns.

That may particularly impact nations that are already battling food crises, according to a report from 16 organizations including United Nations agencies and the European Union. The number of people facing acute food insecurity will almost double this year to 265 million unless swift action is taken, the UN’s World Food Programme warned separately.

Increased unemployment is curbing incomes available for food, while supply-chain disruptions are starting to impact food security in many parts of the world, boosting prices of key staples such as wheat and rice. Several governments have restricted some food exports to safeguard domestic supplies recently, and the UN has urged countries to avoid “beggar-thy-neighbor policies” seen during a global food price crisis a decade ago.

“Covid-19 is potentially catastrophic for millions who are already hanging by a thread,” Arif Husain, senior economist at the WFP, said in a statement. “It is a hammer blow for millions more who can only eat if they earn a wage. It only takes one more shock – like Covid-19 – to push them over the edge.”

Last year, 135 million people in 55 countries and territories faced acute food insecurity and were in need of food aid, with conflict and climate change being the major drivers, according to the report. Africa had the largest number of people affected.

The pandemic threatens to drive up acute food insecurity in countries that depend on food imports or derive much of their incomes from oil, tourism and remittances, the organizations said. The outbreak may also affect humanitarian aid as resources are diverted to other virus-related efforts, they said.

The report recommended expanding monitoring systems to ensure early action in future to help the most vulnerable to access food. The organizations also called for more support for food processing, transport and local food markets, as well as allowing open trade corridors.

Governments need to help farmers access inputs such as seeds and fertilizers to aid next year’s food production, Husain said in an online briefing on Tuesday. The WFP is seeking funding of a least $10 billion this year, he said.