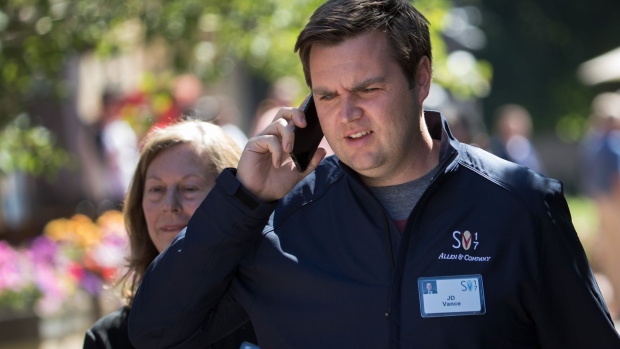 Vehicles parked outside residential homes in Manhasset, New York, U.S., on Friday, April 16, 2021. Across the U.S., house hunters are fighting for scraps in a market picked clean of listings during the key spring homebuying season. , Bloomberg

(Bloomberg) -- Conservatives looking for a fresh populist message to carry into 2022 are taking on Wall Street firms for buying up single family homes as rentals, attacking the growing practice as hurting the middle class.

Blackstone Group Inc., KKR & Co. and other private-equity firms are increasingly making new investments in single-family homes to rent out, betting that the hot housing market will generate solid returns as the U.S. emerges from the coronavirus pandemic.

But the trend, which comes as a shortage of homes for sale is driving up prices, is making the firms attractive targets for politicians who want to appeal to the blue-collar voters former President Donald Trump energized.

“The message is, Washington and big banks and big government and big corporations, they’re all corrupt and you work hard and play by the rules and you’re not getting ahead and this is the reason for it,” said GOP strategist Rick Tyler, who worked on Senator Ted Cruz’s 2016 presidential campaign. “That’s been a very powerful message for both parties.”

And venture capitalist JD Vance, a Republican candidate for the U.S. Senate in Ohio and author of “Hillbilly Elegy,” singled it out in his July 1 speech announcing his candidacy as a factor that’s pricing first-time home buyers out of the market.

The single-family rental industry argues that institutions owning only a fraction of the U.S. housing stock isn’t enough to have a significant effect, and that the real reason prices are rising is a lack of supply. The industry says it’s bringing fresh capital to the market while filling a need for more rentals.

There were almost 610,000 single-family homes in Ohio in 2019 that were rented, or 17.3% of all homes in the state, a percentage that is in line with the U.S. number, according to the Harvard Joint Center for Housing Studies. At the same time, low inventory has sent housing prices soaring in many markets, making it increasingly difficult for buyers to find a home they can afford.

Vanessa Simmons, a branch manager for Coldwell Banker Realty in suburban Columbus, Ohio, estimated that small investors and real estate investment trusts such as American Homes 4 Rent are buying between 15% and 20% of single-family homes in the Columbus market, sometimes offering as much as $25,000 above the list price.

The moves can block first-time home buyers -- especially those using financing from the Federal Housing Administration and Department of Veterans Affairs, she said.

Liberals who have been critical of Wall Street’s role in the 2008 financial collapse are also wary of the private equity’s role in rental housing. Massachusetts Senator Elizabeth Warren called it “another massive private-equity real estate grab that wreaks havoc on families and communities -- especially families of color still recovering from losing their homes in the last financial crash.”

Senator Sherrod Brown, an Ohio Democrat and the chairman of the Senate Banking Committee, has asked Pretium Partners, one of the biggest owners of single-family rental properties in the U.S., to respond to reports it’s sought to evict tenants despite a U.S. moratorium imposed during the pandemic. A spokesperson said the senator is concerned about the role that private equity is playing across the American housing system.

Now Vance is signaling he’ll highlight the issue as he tries to stand out in the large cast of Republicans seeking to replace Senator Rob Portman in a state Trump won twice by 8 percentage points.

“We’ll lose our republic if the middle class is turned into a permanent renter class,” Vance said in a statement. “When you don’t have any ownership stake, you lose your voice.”

Other Republicans can be expected to jump on the issue if there’s more than just anecdotal evidence it’s affecting the market, according to Republican pollster Whit Ayres.

Data compiled by the National Rental Home Council, which represents single-family rental home companies, shows that Ohio has the 10th largest percentage of homes owned by firms at 1.25%, or 0.22% of all housing in the state.

“The data just doesn’t support the contention that large institutions are buying homes at a degree that is putting individual home buyers at a disadvantage,” said David Howard, the council’s executive director.

Still, the trend of institutional investors buying single-family homes and multifamily units for renting can be expected to increase and become more of a political issue as long as the market remains hot, according to Derek Hyra, a professor and founding director of the Metropolitan Policy Center at American University who’s studying the impact of the pandemic on the real estate market. And there’s no denying its one of the factors affecting the market and communities, he said.

“They shouldn’t be scapegoated, but do the decisions that Blackstone and other companies like that make affect people’s lives? Absolutely,” Hyra said.