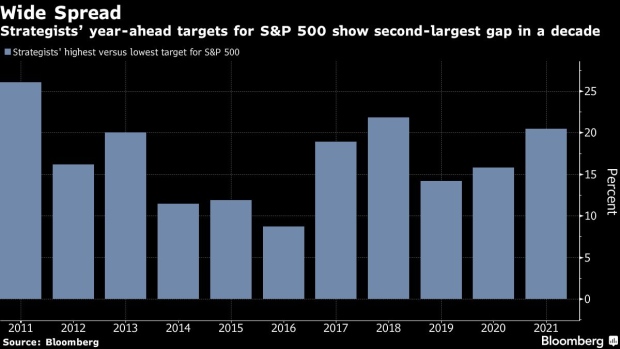 (Bloomberg) -- The newly hawkish Federal Reserve and the ever-evolving virus have made life difficult for Wall Street’s stock prognosticators.

Take the latest forecast from Ed Clissold, chief strategist at Ned Davis Research. He sees the potential for an earnings slowdown and tighter Fed policy to push U.S. equities into “a shallow bear market” next year before the S&P 500 bounces back to end modestly higher.

The cautious tone contrasts with his counterparts at Credit Suisse Group AG and JPMorgan Chase & Co. Jonathan Golub at Credit Suisse just lifted his 2022 target for the S&P 500 by 200 points to 5,200, citing the improving prospects for corporate earnings and easy financial conditions. Marko Kolanovic and his colleagues at JPMorgan say market volatility will subside next year when the pandemic ends and the economy fully recovers.

The conflicting narratives land in a world that has become almost impossible to predict, from investors having to deal with a hawkish central bank for the first time in three years to the threat of further shutdowns that could derail growth. So far, the range of S&P 500 estimates compiled by Bloomberg for 2022 stretches from 4,400 to 5,300 -- a 20% spread that is the second-widest in a decade.

“There’s more variables that are in play right now, whether it’s what’s going on in the Fed, inflation, or the kind of continuing yo-yoing that occurs as dealt with pandemic,” said Joshua Leonardi, a director at TD Prime Services. “It may just be as a result of where we are from more of a macro geopolitical standpoint that offers a wider array of possible outcomes.”

While Ned Davis’s Clissold is toward the bullish end of that spectrum, his prediction for turbulence along the way underscores how hard it is to have conviction. He expects the S&P 500 to finish next year at 5,000 -- a 6% gain from the last close -- but not before it falls by at least 10% at one point. That would end a run of steady gains. In the past 13 months, the market just endured one pullback of more than 5%.

“Conditions will almost assuredly not be as market friendly in 2022,” Clissold wrote in a note to clients Wednesday. “We expect a slower pace of gains, more frequent pullbacks, a high probability of a double-digit correction, and a realistic chance of a shallow bear market.”

Predicting where stocks will be in 13 months has always been a fraught exercise, but if the last two weeks are any indication of the turmoil to come, it is a fool’s errand right now.

Just as investors grew convinced a new strain of the Covid virus and the Fed’s hawkish tilt could mark an end to the popular dip-buying trade, bargain hunters resurfaced, helping drive the S&P 500 back to within a whisker of its all-time closing high.

Professional forecasters have had a rough 2021, getting a lot right but consistently missing the mark on a market that did nothing but go higher for most of the year. In January, the highest year-end target was 4,400. The S&P 500 rose 0.3% to 4,701 Wednesday.

Clissold acknowledged one wild card that could disrupt his forecast: profit margins, which he expects to contract by 30 basis points because of wage pressure. Though he pointed out that for the past 40 years, margin compression has rarely come during economic expansions. Notably, corporate America’s ability to wring more profits from sales has helped underpin an epic run of positive surprises.

Another uncertainty is tied to the Fed’s plan on monetary tightening. While rate hikes don’t necessarily kill bull markets, the pace of increases matters a lot for equity performance during the first year of a tightening cycle: a gain of 11% during slow ones versus a loss of 2.7% during fast ones, according to eight decades of data compiled by Ned Davis.

The firm’s Cycle Composite model points to a major retrenchment in the first half of 2022 before the market stages a comeback.

“How much Covid-19, supply chain, and inflation risks impact the economy will determine if the Cycle Composite’s 1H 2022 downtrend comes to fruition,” Clissold said. Amid the risk of heightened volatility, he recommends investors to favor high quality large-cap stocks and companies with stable growth.