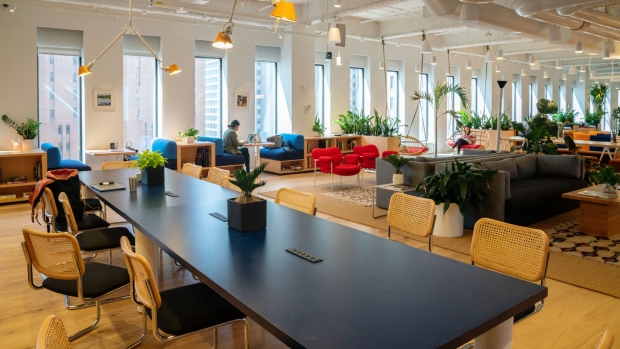 WeWork’s chairman outlined a new five-year turnaround plan in a meeting with employees on Friday, explaining how the troubled co-working company aims to stem the losses following a botched initial public offering attempt. He also announced several new additions to the executive team.

After brushes with insolvency earlier this year, WeWork is now shedding units and cutting jobs, and will focus more narrowly on its central business as part of the new roadmap. The company lost more than US$1 billion last quarter, and now has a target to become cash-flow positive by 2023 and to deliver positive adjusted earnings before interest, taxes, depreciation and amortization by 2021, management told employees Friday, according to people familiar with the matter.

WeWork also introduced a slate of new leaders. It named Maurice Levy, former CEO and chairman of Publicis Groupe SA, as interim chief marketing and communications officer, the people said. It also hired two executives from SoftBank Group Corp.: Ralf Wenzel as chief product officer and Mike Bucy as chief transformation officer, said the people, who asked not to be identified because the staff meeting was private. It also promoted Matt Jahansouz, who joined WeWork earlier this year from Goldman Sachs Group Inc., to the role of chief people officer.

Marcelo Claure, the executive chairman, told employees that the current pair of co-chief executive officers, Artie Minson and Sebastian Gunningham, will stay on. In an apparent acknowledgment of the all-male group of leaders, Claure reiterated that the company would take diversity into account and add a female board member in the future. A spokeswoman for WeWork parent We Co. declined to comment.

Claure also said that the company would expand geographically, but in a measured and profitable way, according to the people, adding that joint ventures and franchising opportunities could be part of that strategy. WeWork will continue leasing space in its top 12 markets, which include London and New York, but could choose to work with landlords in other cities to manage their properties without signing long-term commitments, Claure told employees. Such management agreements are common among WeWork rivals, such as Industrious, and in the hotel industry.

The new strategy stands in contrast with the growth-at-all-costs mentality of WeWork’s early days. Claure emphasized financial discipline, accountability and a focus on company’s core business of renting out office space. Acquisitions are not likely to be a priority going forward, one person said. In the past, WeWork had dabbled in running other projects like schools and living spaces.

WeWork has lost several executives in recent months after its plans to go public crumbled in spectacular fashion. After pulling its IPO paperwork, WeWork was close to running out of money. It received a US$9.5 billion rescue package last month from SoftBank, its largest investor, which got a majority stake in the deal.

The new five-year plan aims to reverse WeWork’s substantial losses, which doubled in the last quarter to US$1.25 billion. In addition to seeking to sell some of its recently acquired businesses, the company is cutting 2,400 jobs globally, or almost 20 per cent of its workforce.