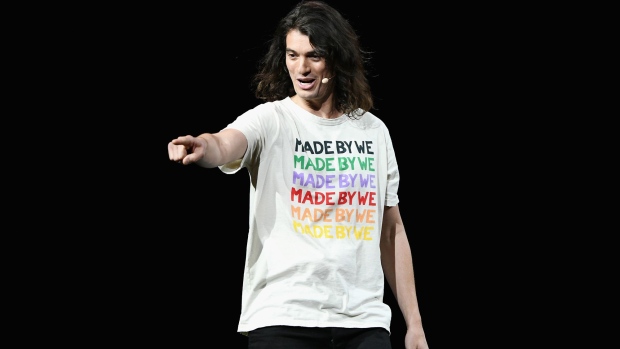 Over the past six days, WeWork executives have raced from city to city in an attempt to win over increasingly skeptical investors.

But by the time the company’s Gulfstream G-6 touched down outside New York late Tuesday night, the grandiose ambitions of Adam Neumann, the company’s brash co-founder and pitchman, remained poised on a knife’s edge. His own fortune, while still enviable, was rapidly slipping away.

With WeWork’s valuation plummeting, anxiety is growing about when, how or even whether the hipster office-rental company should go public, with even its own bankers unnerved. In question, too, is where this now leaves other fast-growing, money-burning companies – the so-called unicorns.

Neumann, who over the years helped WeWork raise more than $12 billion while never turning a dime of profit, is said to be pressing ahead with plans for an initial public offering while simultaneously hunting for still more private capital.

At the same time, WeWork is considering changing various corporate governance practices, according to people with knowledge of the situation.

With so much up in the air, WeWork plans to hold a town hall-style meeting for its employees at its New York headquarters on Thursday.

Both of its lead financial advisers -- JPMorgan Chase & Co. and Goldman Sachs Group Inc. -- have concerns about proceeding with an IPO that could value the company as low as $15 billion, the people said, asking not to be identified because the talks are confidential. That’s set off a push to make the public sale more palatable to potential investors with governance reforms.

Any decision ultimately rests with Neumann, who maintains voting control through a three-class share structure and has been an adamant proponent of the IPO, the people said.

He also has been criticized for borrowing the firm’s money, leasing properties he owns back to the company and selling chunks of equity ahead of the planned IPO. The firm rents space in four buildings owned by Neumann, according to the prospectus. It signed a lease on three of them the day he obtained his stake, and committed to being a tenant in them within the next year.

Such disclosures -- and the billions of dollars of losses the firm has racked up in recent years -- increased unease among investors already frustrated by the lackluster market debuts of Silicon Valley darlings such as Uber Technologies Inc.

Until recently, Neumann was poised to become one of the world’s richest entrepreneurs. Earlier this year, more than a decade after he launched WeWork, some bankers were privately touting a valuation as high as $65 billion. That would have pegged Neumann’s current 22% stake at $14 billion, catapulting him into the ranks of the world’s 150 richest people.

Now, based on more recent valuations, Neumann’s stake might be worth as little as $3 billion – not enough for a listing in the 500-member Bloomberg Billionaires Index.

Still, that’s nothing to sneeze at, particularly for someone who spent part of his childhood on a kibbutz. Neumann moved to New York from Israel in 2001 to have fun and make a lot of money, as he put it in a commencement address at Baruch College, his alma mater. Then he met Rebekah, his future wife, who’s listed in a prospectus as a co-founder, chief brand and impact officer, and a “strategic thought partner.”

The stakes are even higher for SoftBank, WeWork’s largest investor, which added to its stake in January at a $47 billion valuation. WeWork needs to raise at least $3 billion through an IPO to tap into an additional $6 billion credit line that bankers have been setting up in recent weeks. The facility requires the company to carry out its offering by Dec. 31, one of the people said.

The goal is to conclude a roadshow and price the offering before Rosh Hashana, one of the people said, effectively setting a deadline of Sept. 27. Getting it done beforehand would allow Neumann, 40, to avoid using technology and observe the holiday in compliance with Jewish orthodoxy.

It’s unclear what changes WeWork may make to its governance to improve interest in its IPO. The company already has taken some steps, such as adding a woman to its board and having Neumann return $5.9 million of partnership interests initially granted to him as compensation for trademarks used in a rebranding. Yet its prospectus last month raised a variety of other concerns. Among them: The company paid Neumann rent and lent him money. There’s also his voting rights over major decisions.

WeWork, which owns or leases offices and then rents space to companies that typically have shorter-term needs, released a preliminary prospectus last month showing the firm had racked up billions in losses and was burning cash. It lost $690 million in this year’s first half, bringing total losses to almost $3 billion in the past three years.

The company had planned to hold a formal roadshow to promote the offering as soon as this week.

Early this year, Goldman Sachs privately suggested to people close to WeWork that its valuation could rise to $65 billion after going public. Advisers estimate it may achieve less than a third of that under current conditions.

Meanwhile, SoftBank’s hefty investment in WeWork adds to pressure on Wall Street dealmakers to ensure any public offering doesn’t go awry. SoftBank’s Vision Fund owns stakes in a vast array of technology ventures, giving the firm clout in deciding which investment banks are hired for future fundraisings. It has pressed WeWork to postpone the stock offering, according to people with knowledge of the talks.

The Vision Fund invested in WeWork at about a $20 billion valuation in early 2017, while SoftBank Group kept pouring in money. A weak IPO could hurt the value of the fund’s stake just as SoftBank tries to persuade customers to bankroll a second $108 billion iteration of the investment vehicle.