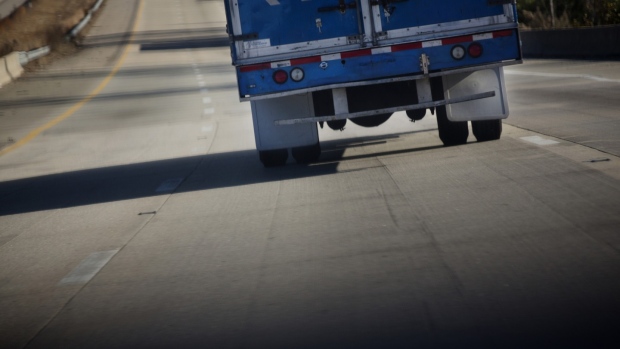 A truck equipped with an underride guard moves along I-95 outside of Rocky Mount, North Carolina, U.S. , Bloomberg

(Bloomberg) -- XPO Logistics Inc. is selling $1 billion of bonds to refinance debt as it seeks to combat cooling European demand and lost business from its largest customer.

The trucking company and warehouse operator will use the bonds to repay borrowings under its existing credit agreement, according to a statement from the firm. The 5.5-year securities can’t be bought back for 2.5 years, according to a person familiar with the matter, who asked not to be identified as the details are private.

XPO cut its 2019 profit forecast on Feb. 15 for the second time in two months, citing the loss of business from its largest customer and softening European demand. While it didn’t identify the firm that cut back business by two-thirds, Wall Street analysts and industry consultants said it was most certainly Amazon.com Inc., which has been building up its own logistics network, reducing the e-commerce giant’s need for third-party providers.

Once Morgan Stanley’s top equity pick for 2019, analyst Ravi Shanker recently downgraded the stock as the company’s change in guidance “has raised questions on forward visibility,” according to a report Tuesday.

XPO, based in Greenwich, Connecticut, also said that it may amend its existing $1 billion revolving credit facility by extending its maturity, according to the statement. The bond sale is being managed by Citigroup Inc., Morgan Stanley and JPMorgan Chase & Co., the person familiar said.

--With assistance from Gowri Gurumurthy.

To contact the editors responsible for this story: Nikolaj Gammeltoft at ngammeltoft@bloomberg.net, Sally Bakewell, Dan Wilchins