The climate for activist investing has never been more fertile in Canada, according to one of the country’s top mergers and acquisitions lawyers.

“We’ve got files coming out of everywhere,” Walied Soliman, global and Canadian chair of Norton Rose Fulbright, said of the activist interest presented to his firm in a BNN Bloomberg interview on Tuesday. “A lot of this stuff doesn’t become public, but it’s a very, very, very busy season.”

Activist investing hit a record in 2018, with 75 Canadian companies and a total of 922 global companies targeted.

Detour Gold Corp. (DGC.TO) saw four members of its board voted out in a December activist vote following pressure from Paulson & Co., while Hudbay Minerals Inc.’s (HBM.TO) second-largest investor called for an ouster of the company’s CEO in January. 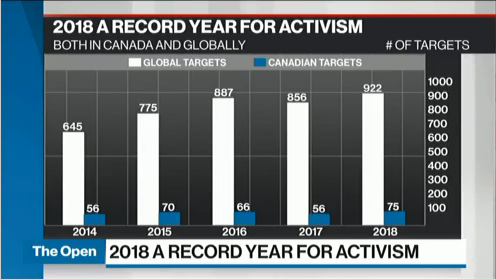 “Where we’ve got a company that’s truly underperforming, and a short seller who comes in with a non-exaggerated thesis as to where there is a problem, I’m very supportive of those guys playing a role in the market,” he said.

However, he cautioned that not every activist investor is focused purely on a company’s shares reaching their full potential.

“One of the things we’re seeing is the advent of abusive short sellers in this market and I think that that’s a very, very dangerous phenomenon,” he said. “Those guys need to be fought from a regulatory and a statutory perspective. We need to do everything that we can to shut those folks down.”

Soliman said the activist climate in Canada is so fertile due to “pretty unique” regulations that allow shareholders to call annual general meetings between those that the company schedules with support from only five per cent of the company’s total shares.

There is historical precedent for activist change in Canada. Pershing Square’s Bill Ackman used shareholder dissatisfaction of Canadian Pacific Railway to help mobilize the company’s turnaround under the supervision of Hunter Harrison in 2012.

“If you’re a company that is not performing well and has a diverse shareholder base or has a concentrated shareholder base that’s upset, you need to watch out, because the tools that our regulators and our policymakers have given activists in this country really give them a strong hand at launching campaigns,” he said.