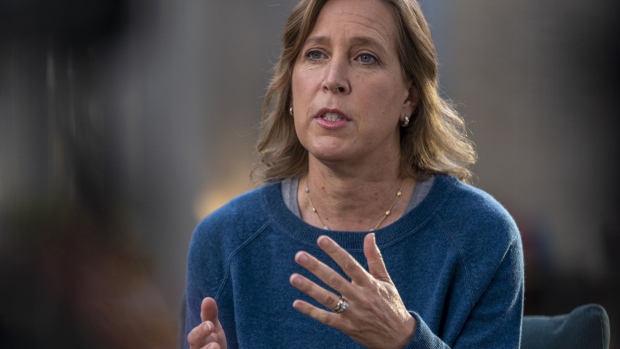 Susan Wojcicki, chief executive officer for YouTube Inc., speaks during a Bloomberg Studio 1.0 television interview in San Bruno, California, U.S., on Thursday, Sept. 23, 2021. YouTube has signed up more than 50 million paid subscribers to its music service, a major milestone for Google’s video site that has long been criticized by record labels and Hollywood studios for giving away their work for free. , Bloomberg

Alphabet Inc.’s Google and Apple Inc. pulled a voting app from opposition leader Alexey Navalny ahead of Russia’s general election, sparking waves of criticism that the companies caved to Kremlin demands. YouTube also recently removed some of Navalny’s videos in the country after government requests.

Asked about the removals, Wojcicki said YouTube considers free speech a “core value” of its platform. “But when we work with governments, there are many things that we have to take in consideration, whether it’s local laws or what’s happening on the ground,” Wojcicki told Bloomberg Television. “So there’s always going to be multiple considerations.”

Russian courts have banned online references to smart voting and declared Navalny’s organization “extremist.” Google faced threats that its Russian employees could be imprisoned to remove the voting app under a threat to imprison local employees, Bloomberg News reported.

Wojcicki declined to comment on specific requests from Russian officials. Google discloses removal requests from governments in the aggregate -- Russia accounts for over half the total since 2011. But Google doesn’t share how often governments ask to pull YouTube footage or how the company responds.

Several U.S. politicians, human rights groups and some Google employees blasted the recent decision from the company, which has long promoted itself as a champion of internet freedoms.

In recent years, Russian opposition figures and dissidents, largely blocked from state media, have relied heavily on YouTube. Navalny has more than 6 million subscribers on the site, and has published several popular videos critical of Russian President Vladimir Putin. In a series of tweets last week, Navalny accused Google and Apple of being “accomplices” to Putin.

Wojcicki said YouTube makes decisions about complying with government requests “based on a whole bunch of different factors.”

“Those are not always requests that make sense for us to honor, but in certain cases we will honor them in that country,” she said.

Wojcicki doesn’t necessarily see the company heading in that direction in Russia now.

“I think we really want to make sure that we’re working and serving audiences as much as we possibly can,” she said. “And if it comes to a point where there’s an issue with the government, we’ll do our best always to work that out.”