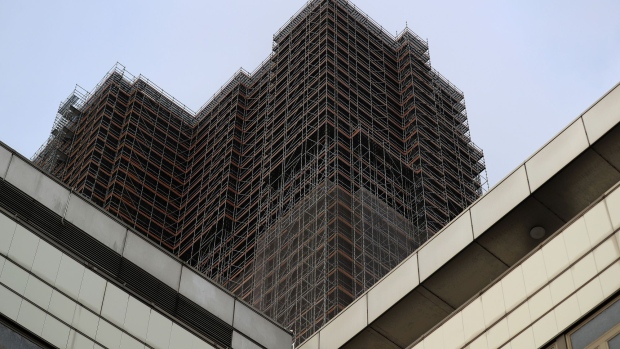 The Adler Group SA Uberlin luxury apartment construction site in Berlin, Germany, on Tuesday, Nov. 2, 2021. A major landlord in Germany, Adler has aggressively sold assets to help prop up its balance sheet, putting about 40% of the company’s portfolio on the block. Photographer: Krisztian Bocsi/Bloomberg , Bloomberg

(Bloomberg) -- Adler Group SA shares rallied for a second day as the company’s top executives worked to reassure investors about the value of its real estate sale to rival LEG Immobilien AG.

In a conference call with analysts and shareholders, Adler’s co-CEOs said the deal helped stabilize liquidity and came at a premium to book value.

While the value of the LEG deal -- a 1.3 billion-euro ($1.5 billion) agreement for apartments and other properties in Germany -- was less than Adler initially expected, it still represents the first major disposal since the company was targeted by short-seller Viceroy Research in October.

Adler shares jumped 7.8% on Thursday, extending a 34% surge from yesterday.

Management refused to take questions on the Viceroy allegations.

The deal closed at a premium of more than 10% to book value, said Co-Chief Executive Officer Thierry Beaudemoulin, adding that net proceeds were about 800 million euros.

Adler is now planning to go ahead with another portfolio sale of about 1 billion euros even if it has reached its target to cut its loan-to-value ratio to less than 50%, according to co-CEO Maximilian Rienecker. Bloomberg reported in October that Adler is in talks with KKR & Co.