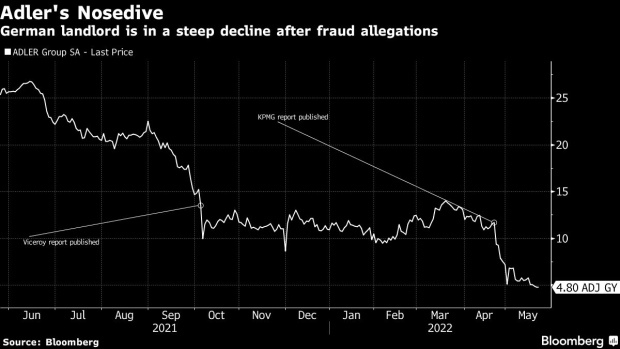 (Bloomberg) -- When the chief of what’s now Adler Group SA needed to travel to close a deal, he hopped on Cevdet Caner’s plane. When board members at a property development unit wanted a raise, they proposed seeking Caner’s approval. And in the deal that sparked the creation of Adler, Caner was paid $11 million for his advice.

The Austrian tycoon spent much of Adler’s rise over the past decade insisting he was just cheering from the sidelines. As he fought criminal prosecution tied to the collapse of his previous real estate venture, Adler and Caner denied he had any direct role in the company.

But a KPMG report commissioned by Adler to refute short-seller allegations that Caner was the firm’s undercover boss -- and used his influence for the benefit of his friends and family -- showed him setting meetings, weighing in on pay and berating executives.

The findings have left Adler and its new Chairman Stefan Kirsten in the uncomfortable position of trying to unwind ties with Caner while two of the company’s three biggest shareholders were either advised by him or funded with his family’s money. That could complicate any major moves for Adler as it seeks to bolster confidence after an 83% stock plunge in the past year.

A lawyer for Caner didn’t respond to a request for comment.

Caner has been the elephant in the room ever since short-seller Fraser Perring accused him in October of being the central figure in a small circle of investors who benefited from complex transactions at the expense of Adler shareholders and bondholders. An anonymous former associate of Caner’s also sent warnings to Adler’s banks, first reported by Bloomberg.

One of those transactions, which involved Caner’s brother-in-law, is now being probed by Frankfurt prosecutors after German regulator BaFin filed a complaint, a person familiar with the matter told Bloomberg on Tuesday. KPMG had questioned the valuation of the 2019 deal, which was ultimately not realized because the necessary requirements weren’t obtained.

As Adler sought to refute Perring’s allegations over the past months, Caner stayed out of the spotlight. He had spent years fighting criminal charges tied to the collapse of his previous venture, resulting in his acquittal in 2020. With Adler, he said he advised on a deal-by-deal basis but didn’t have a role at the company and wasn’t a shareholder himself -- even though his family invested in the landlord.

Kirsten didn’t name Caner directly when he talked of the need to rid the company of inappropriate “external influence,” and he has generally avoided discussing him on public calls. Adler even withheld more than 800,000 emails and electronic files that were needed to examine the allegations, including some involving Caner, KPMG said. Adler said its automated screening process flagged that the documents may be protected by legal privileges and that it had been unable to sort through them all in time in order to allow more to be disclosed.

In response, KPMG in a highly unusual step refused to give an opinion on Adler’s accounts and later resigned from its role as auditor, sending the stock tumbling. Its forensic report, made public by Adler in April, was partly redacted by the landlord and had placeholders for the names of key players, though most of them can be identified by their various roles and relationships.

They show that Caner -- identified only as ‘Extern7’ -- held irregular meetings with Adler executives, arranged strategy meetings with management and “exerted influence on personnel decisions,  the preparation of strategic decisions, and individual issues arising from transactions,” KPMG wrote. On several occasions, executives met on Caner’s yacht or used his plane for business or private travel.

One of those occasions was the controversial three-way merger that created Adler Group in 2020. Minority shareholders at one of the companies -- ADO Properties -- opposed the transaction, because they worried they were forced to merge two other companies whose assets were of a much lower quality and which had much more debt.

One of them was Consus Real Estate AG, which was controlled at the time by an investment vehicle called Aggregate Holdings that’s been advised by Caner in the past and is owned by his long-time associate Guenther Walcher. Perring has argued the value of the developer had been artificially inflated before it was sold in 2019. KPMG said it couldn’t refute the allegation.

When Consus was acquired, the deal gave Walcher a big stake in the newly formed Adler. But after KPMG’s probe, the landlord said Consus was a dud and wrote down almost the entire purchase price of the developer -- a goodwill impairment of 1.1 billion euros.

While Caner had no official role advising on the three-way merger, KPMG’s report shows that top executives involved in it used his personal aircraft to shuttle between Berlin and Cologne on the eve of the transaction. Among them was Thierry Beaudemoulin, who is now tasked with restoring investor confidence as sole CEO of Adler.

The report, which covered the period from 2017 until Perring made his allegations public in October last year, also highlighted a series of emails from Caner to executives including Beaudemoulin in the days and weeks after the deal was announced. In them, the tycoon warned of issues relating to the deal and chastises the CEO for his lack of progress and communication.

“i thought that was dine!?” Caner wrote in one angry email that was riddled with typos. “can you pls start communicating now???!!!!!! novody could reach you the last 10 days!”

Caner also received more than 10.6 million euros  ($11.1 million) for advising Adler Real Estate, the third company in the three-way deal, on the precursor transaction that opened the door for the creation of Adler Group in the first place.

Yet the payments were split into 10 seperate tranches, only one of which appears to have been paid directly to the tycoon. At least two, KPMG’s report shows, went to his wife Gerda, who at the time was a major shareholder in Adler Real Estate and remains one of the largest investors in Adler Group today.

In addition to Caner, companies close to the tycoon won lucrative advisory contracts with Adler Real Estate and Consus, including Meridien Capital Management Ltd., which received at least 6.3 million euros since 2017, KPMG found. The firm is officially owned by Caner’s long-time associate Richard Bunning, but the former associate turned whistleblower has argued that Caner ultimately controls and owns it. Caner has consistently denied that he has a financial interest.

KPMG said that at the very least, there is “a close business relationship” between Caner and Meridien. The company shares the same address as a vehicle for which Caner is managing director. Caner assisted Meridien in advisory projects, and his Christmas party invitations were sent to management board members of Adler, Adler Real Estate or Consus by Meridien.

Meridien’s ties with Adler companies and backers also seem to have gone beyond the advisory mandates. Several former Meridien employees at various times had key positions at Adler Real Estate, Consus and Aggregate. Meridien also had a profit-sharing agreement with a company controlled by Caner’s wife, KPMG’s review found. And the emails reviewed by KPMG suggest Meridien was a shareholder in at least one of them.

In a message from January 2020, a Meridien employee complained to Beaudemoulin that Consus management took too long to answer emails. “No other company which we invest in does that,” the employee wrote.

While KPMG in the end could neither refute nor confirm many of Perring’s allegations against Adler and Caner, the deep and complex ties outlined in the report spooked investors. After initially claiming that the KPMG report exonerated Adler, Kirsten soon came under pressure to clarify his relation with the Austrian tycoon.

He said he had first met Caner in Cannes in 2016 but hadn’t heard from him since his appointment as chairman in February this year. He also vowed to try and make more documents available to enable the company to resolve the issues that prevented KPMG from giving an audit opinion. It’s unclear who will review those documents now as Kirsten said the forensic probe has concluded and KPMG resigned as auditor.

For his part, Caner issued a brief statement following the publication of the report welcoming its findings and saying he would now “focus again on successfully realizing the various projects I’m working on, both inside and outside the real-estate sector.”

Several members of Adler’s board and executive team have now tendered their resignations, including some with the most transparent links to Caner. But while those that remain might prefer to avoid the subject, it is far from clear they are free of his influence. Two of Adler Group’s top three shareholders -- Walcher and Caner’s wife Gerda -- have links to the Austrian and wield a combined stake of more than 13%.