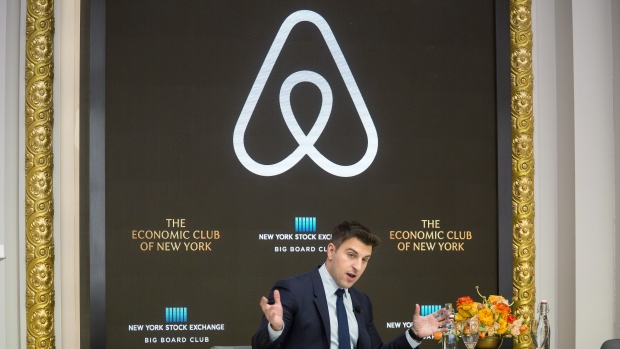 Airbnb Inc. is ramping up its fight against New York officials by providing financial support to a lawsuit against the city.

Stanley Karol, a 56-year-old Airbnb host in Brooklyn, sued the city in federal court Wednesday, accusing officials of retaliating against him for speaking out in support of home rentals. The city imposed fines on Karol that could total more than US$30,000 after he appeared at a council meeting in June, according to the complaint. Airbnb agreed to pay his legal fees in the case, said Christopher Nulty, a spokesman for the company.

The suit was filed just hours before the New York City council is expected to pass a bill requiring Airbnb and other home-rental sites to disclose the names and addresses of hosts. The bill is designed to help authorities crack down on illegal short-term stays. Airbnb opposes the measure, saying it would violate the privacy of law-abiding hosts.

The Airbnb-backed lawsuit is another twist in a nearly decade-long war between the company and New York. Airbnb sued the city and state directly in 2016 over a law restricting short-term sublets. It settled both cases within a couple months. The battle raged on this year, with the city comptroller accusing Airbnb of costing New Yorkers $616 million in rent increases and Airbnb accusing city council members in June of being in the pockets of the hotel industry.

Litigation finance is a controversial new tool for Airbnb. Peter Thiel, the billionaire technology investor and President Donald Trump backer, used it to great effect when he funded Hulk Hogan’s suit against Gawker. Unlike Thiel, Airbnb isn’t trying to hide its involvement in the New York suit.

If the city passes the new law Wednesday, Airbnb would be required to share hosts’ information with the mayor’s Office of Special Enforcement, the same agency Karol has accused of targeting him. Karol received citations for converting his basement into an illegal hotel and failing to meet fire codes, the complaint said.

“People shouldn’t have to worry that when they go home, there’s going to be a knock on the door just because they decided to speak up against the government,” said Andrew Celli, an attorney at Emery Celli Brinckerhoff & Abady LLP, which is representing Karol in the case.