Airbus SE muscled its way to the front again on the third day of the Paris Air Show, adding orders for its newest plane after U.S. rival Boeing Co. stole the spotlight with a mega-deal for its grounded 737 Max.

The new A321XLR now has seven customers lined up after Qantas Airways Ltd. and U.S.-based Indigo Partners LLC signed on, bringing overall orders to 156 for the narrow-body jet, which can fly farther than the Max and connect destinations that weren’t previously cost-effective. While 44 of those are upgrades of existing commitments, the totals are still impressive: A net 112 planes valued at US$15.9 billion before customary discounts.

With the Max grounded since March after two deadly crashes, this year’s biennial event was supposed to be dominated by Airbus. That narrative got upended on Tuesday when Boeing announced a show-stopping US$24 billion order for the stricken jet. With Wednesday’s action, Airbus has poured some salve on its wounds -- firmly regaining the lead on total order count, thanks largely to the plane it came to Paris to showcase. 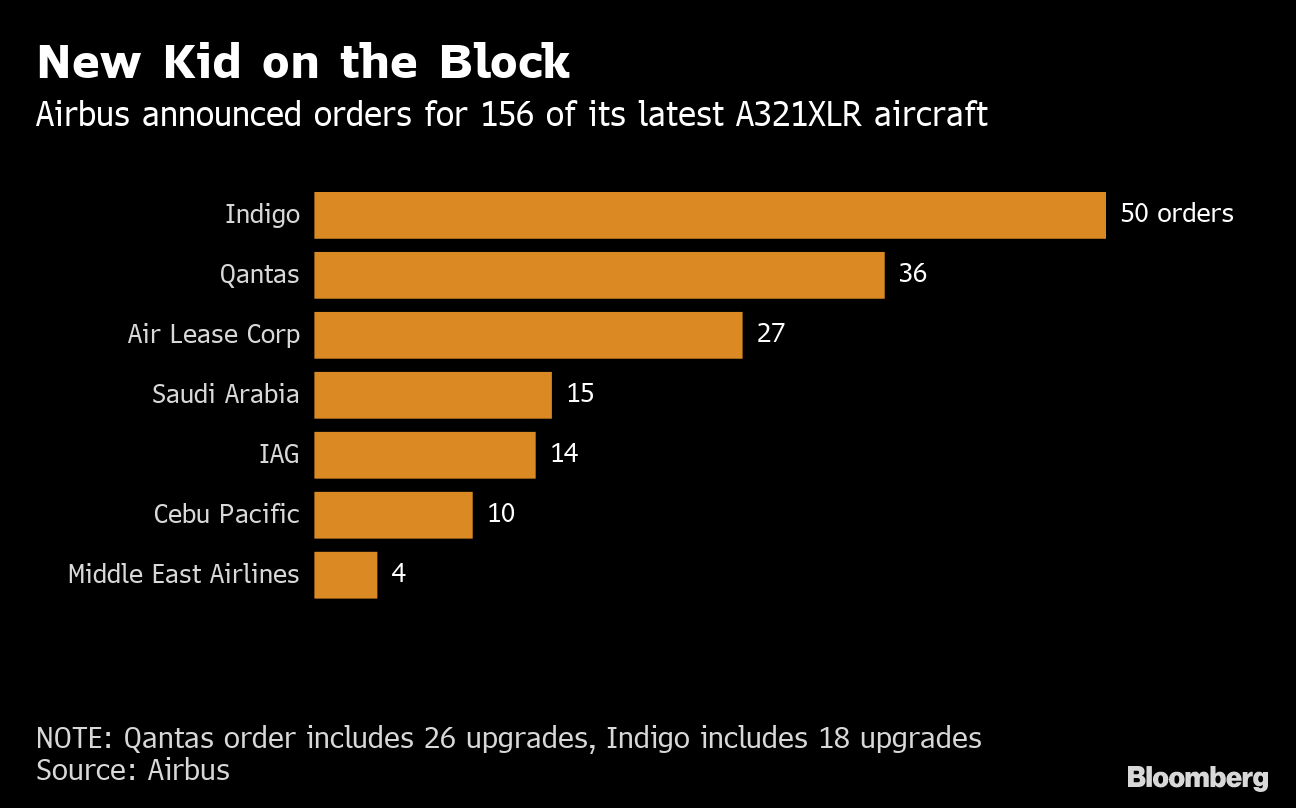 “The counter keeps clocking and continues to clock,” Airbus sales chief Christian Scherer said at a ceremony Wednesday marking the 50-plane deal with Indigo Partners, the U.S. investment firm. While Scherer wouldn’t give any totals, he told those present to wait for the end of the show. “It’s a big number," he said.

Overall, Airbus has racked up US$40.4 billion in commitments at the show, while Boeing is not far behind at US$33.9 billion.

Bill Franke’s Indigo will parcel out the XLRs it ordered to three airlines in its stable of discounters: Budapest-based Wizz Air Holdings Plc, Eastern Europe’s biggest discount airline, Frontier Airlines of the U.S., which aims to fly them coast to coast and could add Hawaii and Alaska, and Chile’s JetSmart.

The deal comes almost two years after the investment firm bought 430 narrow-bodies in Airbus’s biggest-ever order. It comprises 32 new orders worth about $4.5 billion at list prices, and the conversion of 18 of the earlier planes to the longer-range jet. Indigo-owned carriers now operate a combined 295 Airbus planes and with the new commitments have ordered 636.

Earlier, Australia’s Qantas said it would take as many as 36 Airbus SE A321 XLRs, including 26 conversions, giving the deal a net value of about $1.4 billion, based on a list price of $142 million per XLR.

Qantas is focused on tapping demand from Asia, the world’s fastest-growing travel market. With the added range of the XLR, the airline said it will be able to fly narrow-body aircraft on routes such as Cairns-Tokyo and Melbourne-Singapore.

“That changes the economics of lots of potential routes into Asia to make them not just physically possible but financially attractive,” Qantas Chief Executive Officer Alan Joyce said in the statement.

--With assistance from Anurag Kotoky and Angus Whitley.