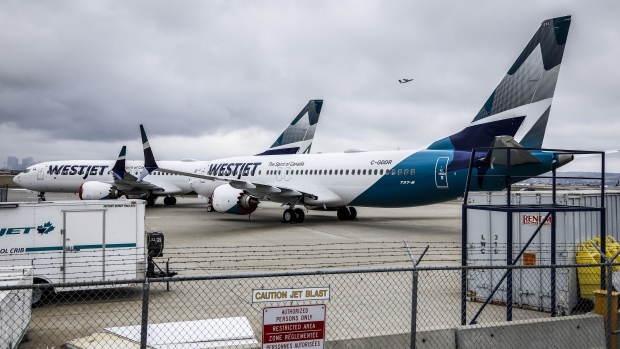 Grounded WestJet Boeing 737 Max aircraft are shown at the airline's facilities in Calgary, May 7, 2019. The Canadian Press/Jeff McIntosh

Jacqui Birchall is hoping for a full refund from WestJet after it cancelled her flight from Puerto Vallarta to Vancouver as part of its major capacity reduction in response to the COVID-19 pandemic.

"WestJet is refusing a refund and they're giving WestJet dollars instead ... so you have to rebook with WestJet," said Birchall, a retired teacher who spends half the year in Mexico.

The store-credit policy, typical of Canadian airlines over the past month as border closures and plummeting travel demand prompt carriers to cancel routes en masse, has sparked frustration among travellers stranded abroad or stuck at home.

Now, a statement on the Canadian Transportation Agency website says airlines are not obliged to refund passengers for flights cancelled due to the novel coronavirus or other reasons outside an airline's control.

Current rules "only require that the airline ensure passengers can complete their itineraries," the post from Wednesday states. "Some airlines' tariffs provide for refunds in certain cases, but may have clauses that airlines believe relieve them of such obligations in force majeure situations."

Advocates say the statement, which is unsigned, lacks the authority of an official ruling, each of which is signed by one or more of the members who comprise the tribunal.

"The Canadian Transportation Agency is the administrative body that is first in line to interpret the regulations. But they can only do that through decisions, and this is not a decision," said Christian Nielsen, chief legal officer of AirHelp, a Berlin-based passenger-rights company.

"Have you ever heard of a court issuing a statement without hearing the parties, and without a judge signing it?" asked passenger rights advocate Gabor Lukacs. "There is no binding legal decision behind this statement."

Passenger protection regulations rolled out last year stipulate that, in the event of a cancellation, prolonged delay or flight bumping that is within the carrier's control, airlines must "refund the unused portion of the ticket" if alternate travel arrangements do not suit the customer's needs.

If a flight is cancelled for reasons outside an airline's control, however, the new rules only require alternate arrangements, not a refund.

"It doesn't say anything about a situation where they're not able to reroute" -- such as a deadly virus that has cratered air travel and quarantined entire countries -- said Nielsen.

"And that's why the CTA has to come in and provided guidance, because it's actually not accounted for in the regulations."

Several older decisions by the federal agency itself appear to contravene the web post, with at least three rulings in the past seven years affirming air travellers' right to a refund regardless of whether a flight cancellation is beyond the airline's control, Lukacs said.

A 2014 decision reiterates "the right of passengers to be refunded for the unused portions of their tickets if the carrier is unable to provide transportation on its services or on the services of other carrier(s) within a reasonable period of time."

A 2013 ruling concerning Porter Airlines found that "it is unreasonable for Porter to refuse to refund the fare paid by a passenger because of its cancellation of a flight, even if the cause is an event beyond Porter's control."

Airlines have been sending repatriation flights and offering customers vouchers -- an approach the watchdog supports -- but most advertise no refund policy for cancelled routes.

WestJet's website highlights future travel credit for cancelled flights, but says: "We are not processing refunds to original form of payment at this time."

The disclaimer comes despite the company's tariff -- the contract between airline and passenger -- which states that "the unused portion of the passenger's ticket(s) will be refunded" in the same form as it was purchased, "should the alternate transportation proposed by the carrier not meet the passenger's satisfaction" in the event of a cancellation beyond the carrier's control.

The statement posted to the transportation agency site says the watchdog is aiming for a balance between passenger protection and "airlines' operational realities" as travel controls prompt carriers to park planes and lay off thousands of employees.

"On the one hand, passengers who have no prospect of completing their planned itineraries with an airline's assistance should not simply be out-of-pocket for the cost of cancelled flights. On the other hand, airlines facing huge drops in passenger volumes and revenues should not be expected to take steps that could threaten their economic viability," the statement reads.

"While any specific situation brought before the CTA will be examined on its merits, the CTA believes that, generally speaking, an appropriate approach in the current context could be for airlines to provide affected passengers with vouchers or credits for future travel, as long as these vouchers or credits do not expire in an unreasonably short period of time," the post says, suggesting 24 months as a reasonable time frame.