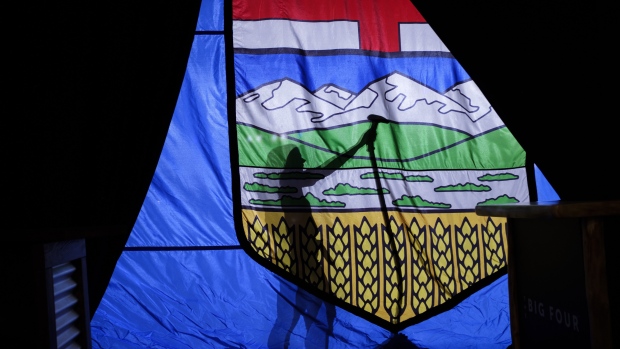 A campaign worker steams the wrinkles from a large Alberta flag in Calgary, Alta., Tuesday, April 16, 2019. , The Canadian Press

Alberta sold $300 million (US$207 million) in 100-year bonds in a private placement, according to people familiar with the matter.

The debt will mature on June 1, 2120, and will have a 3.06 per cent coupon, according to Bloomberg data. The notes were priced to yield 183 basis points over Canadian government bonds due December 2048.

Alberta is among Canadian provinces turning to private placements and responding to requests from investors to move ahead their funding plans. Risk spreads between provincial and federal bonds have blown out in recent weeks in the global credit crunch that stemmed from the coronavirus pandemic.

The Bank of Canada has taken action to try to restore order to funding markets, announcing a series of measures including a new program through which the central bank can buy provincial paper that matures in 12 months or less.

The century bond transaction was arranged by Bank of Nova Scotia, Bloomberg data show. An official with the Alberta government did not respond to inquiries.