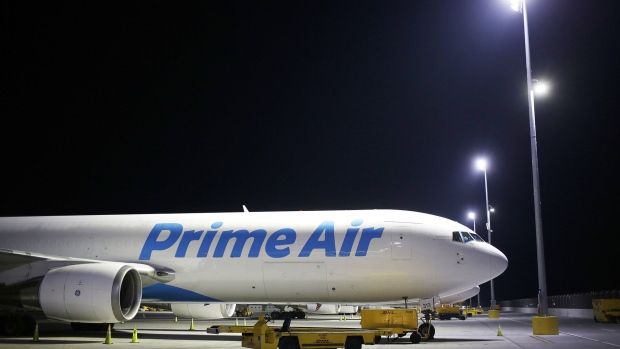 Amazon.com Inc. is opening warehouses and shipping hubs in the U.S. at the rate of about one every 24 hours. The ultimate aim is to ensure that virtually every product the company sells is a van ride—and eventually a drone flight—away from customers’ homes. And yet, last week Amazon announced it was buying 11 Boeing 767-300 jets for its air-cargo division, mostly to get products to Prime subscribers.

Despite creating algorithms to anticipate shoppers’ needs and opening all those warehouses, Amazon can’t meet its one- and two-day shipping pledge to customers without an ever-expanding fleet of pricey jets. That reality has become clearer since the pandemic fueled a surge in online shopping that has strained the resources of United Parcel Service Inc., FedEx Corp. and the U.S. Postal Service—forcing Amazon to pick up the slack.

Inside the company, Amazon Air is sometimes considered more of an expensive necessity than an asset. An organization bent on delivering orders quickly and efficiently would rather move products by truck than plane, which costs as much as seven times more. Employees have internalized this fact with a typically Amazonian mantra: “Air is a defect.” It doesn’t help that many of the planes Amazon flies are older models that spew more greenhouse gases than newer, more fuel-efficient planes, undermining a newfound commitment to battling climate change.

The same day it announced the 767 order, Amazon flew 153 flights—the equivalent of one takeoff every nine minutes—among 40 airports stretching from Germany to southern California, according to data from Plane Finder, a flight tracker. When the 11 newly purchased jets have entered service by the end of next year, Amazon Air will have a fleet of 85 planes.

The expanded air-cargo operation will add billions of dollars to already hefty shipping costs that amounted to US$52 billion in the 12 months ended in September. Though Amazon is one of the wealthiest and most valuable companies in the world, it has historically operated on razor-thin margins and plowed cash back into the business, sometimes to the consternation of investors who’d rather see the company focus on profitability.

Maju Kuruvilla, a former Amazon logistics executive and now chief technology officer of e-commerce startup Bolt Financial Inc., says his former employer has no choice in the matter. “The entire UPS, FedEx network was jammed” during the peak of the 2020 holiday season, he says. “So imagine if 50 per cent of Amazon’s packages got added to this existing network? It would have been a disaster for everyone. Everyone should be glad Amazon built this network.”

Amazon, typically tight-lipped about its future plans, shared background information on its investments and fleet, but a spokesperson declined requests for on-the-record interviews.

For many years, Amazon was a kind of logistical middleman, receiving bottles of shampoo or crates of books from suppliers, storing them and, when a customer clicked Buy Now, handing the packages off to UPS, the USPS or FedEx. Then in December 2013, a combination of foul weather and logistical bottlenecks derailed holiday deliveries and forced Amazon to issue refunds to irate shoppers. It was an unprecedented setback for a company that puts customers at the center of everything. Not long after, Amazon began expanding its supply chain and building its own transportation network.

A handful of warehouses grew to hundreds, and Amazon established relationships with small trucking firms and air-cargo operators. In 2015, the company began chartering its own regular cargo flights, under a veil of secrecy that featured code names and packages wrapped in black plastic to obscure Amazon’s identity, from a little used airport in southern Ohio.

Called Prime Air when the company introduced its first branded jet in 2016, then renamed to avoid confusion with the yet-to-launch drone fleet, Amazon Air is led by Sarah Rhoads. She’s a former U.S. Navy F-18 pilot who flew combat missions during the Iraq War before starting a second career managing workers who pack and ship items in one of Amazon's warehouses. Rhoads went on to oversee Amazon's warehouse network in the U.K., before being tapped to lead Amazon Air a year after its formal  launch.

The budding air cargo operations quickly began flying dozens of planes, a build-out that coincided with the hiring of contractors to drive tens of thousands of branded blue delivery vans. In 2019, FedEx and Amazon parted ways, declining to renew both air- and ground-delivery contracts. At the time, FedEx said Amazon accounted for less than 1.3 per cent of its revenue, making the break less painful.

That increased the stakes for UPS. Soon after the split, the company reported a 30 per cent jump in next-day air volume. In 2019, the courier outlined the magnitude of its relationship with Amazon for the first time, saying in a filing that Amazon accounted for almost a fifth of its U.S. sales, making the internet retailer by far UPS’s largest customer.

The spike in orders during the pandemic put enormous pressure on UPS and forced it to raise prices. During this year’s peak holiday season, UPS and FedEx also imposed volume quotas on large retailers to prevent their networks from being overwhelmed. In some cases, UPS stopped picking up packages immediately, delaying shipments until it had sufficient capacity.  Last month, both UPS and FedEx said they would keep levying the surcharges indefinitely.

Amazon Air is much smaller than the air-cargo divisions operated by UPS, which had about 260 jets at the end of 2019, and FedEx, which operated 398 at the end of May. Unlike those companies, Amazon doesn’t operate its planes, relying on contractors to fly and maintain them and negotiate with the pilots’ unions, a task that union-averse Amazon would likely prefer to avoid.

Amazon started a UPS-like parcel service in the U.K. last year, but abandoned a similar effort in the U.S. amid the surge in online orders. Much of Wall Street believes Amazon will eventually fly packages for other companies to defray investments in Amazon Air  and generate new revenue streams, much the way it did with other logistics services and its cloud-computing division.

“I absolutely expect them to pick that up again,’’ says Ravi Shanker, a Morgan Stanley logistics and transportation analyst.

But for now, Amazon Air ships items already in its warehouses, typically bound for customers.

The shoppers on the receiving end likely ordered the items using one of Amazon’s quick-delivery options, but not same-day delivery. (If an item appears on Amazon’s website as eligible for same-day or one-day delivery, Amazon says, there’s a good chance it’s already stored in a nearby warehouse.)

Say a shopper in Los Angeles orders a limited-edition stuffed giraffe for a child’s birthday and requests free two-day shipping. Amazon only stocks the rare item in a Chicago warehouse but is prepared to fly it across half the country. Workers in Chicago put the toy in a box and have it trucked to Amazon’s air hub at Rockford International Airport, where it’s added to a pallet in the hold of a waiting plane. After the flight to Ontario, in southern California, a truck takes the package to an Amazon sorting center, where it’s piled with other packages bound for a single zip code and delivered, likely by an Amazon contractor driving a blue van.

It’s a complicated and pricey choreography, but customers get what they want.

“We have to make sure we have the ability to satisfy one, two-day delivery,” David Bozeman, a vice president who leads Amazon’s transportation services group, said in an August interview, describing Amazon Air’s mission. “This is one mode and method of helping us to do that. It certainly is a big part.”

The fleet operates almost exclusively in the U.S. But Amazon, which has operated charter flights between European cities for years, started building its own network on the continent last year with leased planes flown by ASL Airlines, and a hub at Leipzig/Halle airport in Germany.

Besides pushing millions of shoppers online, the pandemic crushed travel and prompted airlines to move up the retirement of their older and less efficient jets. Suddenly the used plane business was a buyer’s market.

Amazon in June announced a lease for 12 planes from Air Transport Services Group Inc. A couple of months later, plane spotters noticed that Amazon had registered in its name four Boeing 767s previously owned by WestJet Airlines Ltd., though the company declined at the time to confirm it had purchased the planes. Another seven of the wide-body aircraft, owned by Delta Air Lines Inc., were sitting in desert aircraft storage in Arizona and California when Amazon came calling.

New 767 freighters carry a list price of about $200 million, though airlines typically receive discounts. Aviation consultants estimate Amazon may have paid as little as US$10 million apiece for its latest planes. Converting them to cargo use—ripping out the seats, reinforcing the flooring, installing cargo doors—costs about US$14 million per plane, according to Laurent Rouaud, co-founder of Avworks Partners, an aviation consulting firm. Amazon, Delta and WestJet declined to disclose the purchase prices.

If it wasn’t clear before, Amazon’s decision to purchase planes indicates the company’s long-term commitment to operating its fleet. Another milestone arrives later this year, when Amazon’s US$1.5 billion cargo terminal at Cincinnati/Northern Kentucky airport comes online, giving the company the means to support more than 100 planes at a hub that sits a day’s ride on a truck, or a much shorter flight, from most people in the U.S. (The new facility is also close to major air hubs for UPS and DHL).

That gives Amazon more options, which employees say is a recurring strategic goal in everything from office space and temp firms to suppliers of essential products. The logic explains why Amazon’s delivery depots are served by several bespoke contractors and why the company runs its cargo airline through a handful of airline partners, in most of which Amazon has the option of buying minority stakes.

Even as Amazon expands its air-cargo division, Chief Executive Officer Jeff Bezos remains fixated on his ultimate dream: building a network so sophisticated it can get just about anything to a customer’s doorstep in 30 minutes or less. One day his vision will bring another air carrier to life, the Prime Now drone fleet, that along with autonomous vehicles and electric vans could make it less necessary to fly stuffed giraffes across the country.