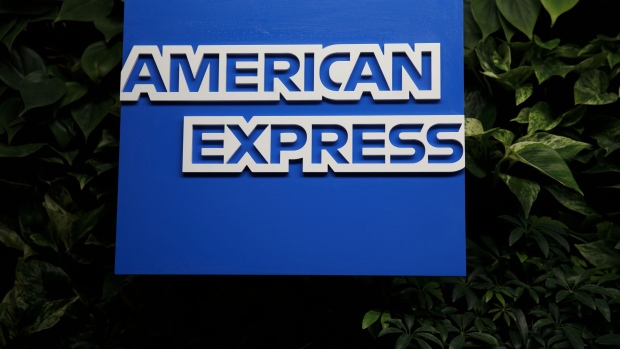 American Express Co. shares dropped after the company walked back an ambitious cost-cutting goal because it’s spending more to attract new cardholders, arguing that consumers are holding up well against the pandemic’s economic toll.

The card company now expects to cut “a little bit” less than the US$3 billion target set in April, Chief Financial Officer Jeff Campbell said Friday in an interview. Higher marketing and promotional costs left expenses down 14 per cent in the third quarter, a smaller drop than analysts predicted.

“When the world looked like it was going to end in mid-April, we very appropriately said we’re going to make a plan to pull all discretionary spending out,” Campbell said. “We’re still very focused on cost control, but we have to balance that to make sure we make the right decisions to rebuild growth momentum.”

Higher-than-expected expenses led to a miss on profit as well, with earnings per share below some estimates. AmEx shares, which are down 19% this year, dropped 3.4 per cent to US$101.22 at 9:30 a.m. in New York.

Credit-card issuers have been struggling with whether to start spending again to acquire new customers, as the coronavirus pandemic sent unemployment soaring and forced consumers to stay home to stem the spread of the disease. But widespread forbearance programs and massive government stimulus programs have largely kept write-offs in check.

The percentage of AmEx’s customers who are 30 days past due on their loan payments dropped to 1.2 per cent in the third quarter from 1.5 per cent a year earlier,the New York-based company said in a statement.

That’s been an encouraging sign for AmEx, Campbell said, adding that the firm has also gotten better at targeting consumers and small businesses with offers for new cards.

“During times like this, probably the go-to move is to reduce marketing, but we don’t believe that’s true,” Chief Executive Officer Stephen Squeri said on a conference call with analysts. “The most important thing we can do is solidify our foundation.”

Squeri said he could have cut marketing costs by 20 per cent and added 40 cents to earnings per share, which were per cent$1.30 in the third quarter. That would have been “short-term and short-lived,” he said.

“What we’re focused on as a company is continuing to build this brand and build this company for the long term,” the CEO said.

Spending on the firm’s cards dropped 19 per cent to per cent$248.7 billion in the quarter, topping the per cent$247 billion average of analyst estimates, as consumers opened their wallets for groceries and online shopping.

AmEx customers are also canceling their cards at a lower rate than last year even though they’re using fewer card perks. The firm set aside just US$2 billion for rewards programs in the third quarter, a 23 per cent drop from a year earlier.

“The investments we have made to enhance our value propositions have yielded strong results, driving spending and loyalty, and our voluntary attrition rates on our proprietary products remain lower than last year,” Squeri said in the statement.