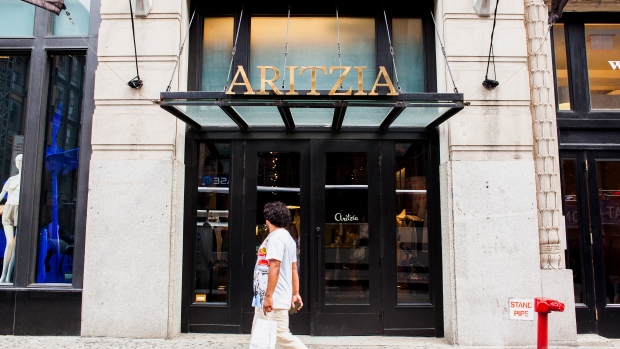 A shopper passes in front of a Aritzia LP store in New York, July 18, 2016. Bloomberg/David Williams

The chief executive of popular Canadian clothing chain Aritzia Inc. said the retailer has experienced few supply chain disruptions despite most of its materials coming from the world’s most virus-ravaged countries.

“Eighty per cent of our raw materials come from Italy, South Korea, Japan and China,” Brian Hill, founder and CEO of Aritzia, told BNN Bloomberg in a phone interview Monday afternoon. “You couldn’t have drawn the map any worse when it came to our raw materials.”

Despite the company’s poor geographic luck and dire prognostications about supply chain issues for the entire retail industry, Hill said there have been few hiccups getting products to Vancouver-based Aritzia’s warehouses.

“The mills and factories are up and running almost at full capacity,” he said. “We have received all our spring and summer products. It’s all in our distribution centres.”

Still, the retailer is bracing for a hit to it its sales and profit after announcing the closure of its entire store network for the foreseeable future late Sunday.

“In May, we’ll deliver our year-end results to February and at that point we’ll give a snapshot of how we fared in the first quarter,” Hill said.

He noted the company’s first fiscal quarter, which includes March, April and May, will “obviously… be impacted greatly by store closures.”

Aritzia may also have to scrap its plan to update investors and analysts on its five-year goals, something the retailer had originally planned for May.

Asked whether the company’s robust e-commerce channel, which has been cited in multiple recent earnings reports as a key driver of sales growth, could make up for in-store sales, Hill offered a blunt response.

“No. Certainly not,” he said. “If we felt that way we might not even have stores.”

RBC Capital Markets analyst Irene Nattel said the retailer’s e-commerce business should absorb “a portion” of the demand that would otherwise go to stores, and described Aritzia’s decision to shutter stores as “wise.”

In a research note, she encouraged clients to expect a break-even first quarter.

BMO Capital Markets analyst Stephen MacLeod, for his part, argued it is “reasonable” to expect EBITDA (earnings before interest, taxes, depreciation, and amortization) to fall to zero while stores are closed.

Aritzia’s profits, he noted, will be funnelled into a fund used to support affected employees and global partners.

But MacLeod and Nattel both said Aritzia has a strong financial position to “weather” this storm.