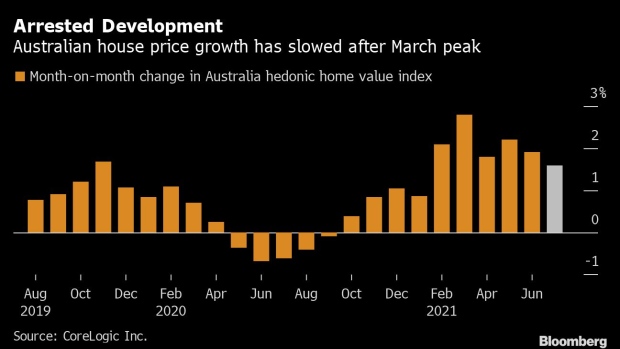 A worker stands on an elevated platform at the construction site of the Landmark residential and commercial project, built by Hutchinson Builders, in Sydney, Australia, on Friday, May 14, 2021. House prices have outstripped wage growth for years, leaving places like Sydney as one of the world’s most unaffordable housing markets. Photographer: Brendon Thorne/Bloomberg , Bloomberg

House prices grew at a slower pace in July in every capital city in Australia, even as the nation posted a 1.6% increase for the month, according to data released by CoreLogic Inc. Monday. Sydney was hit the hardest, with the monthly capital gain on houses in Australia’s most populous city falling to 2% in July from 3.7% in March.

“With dwelling values rising more in a month than incomes are rising in a year, housing is moving out of reach for many members of the community,” according to Tim Lawless, research director at CoreLogic.

However, low interest rates are still fueling demand in a market where supply is running more than a quarter below the five-year average. “The mismatch between demand and advertised supply remains a key factor placing upwards pressure on housing prices,” Lawless said.

The housing boom, which was led by rapid growth in higher-end dwellings, is slowing as prices in that segment cool. CoreLogic is forecasting the rate of growth will continue to slow in the market overall, with tighter credit policies and an earlier-than-expected rise in interest rates the main risks.