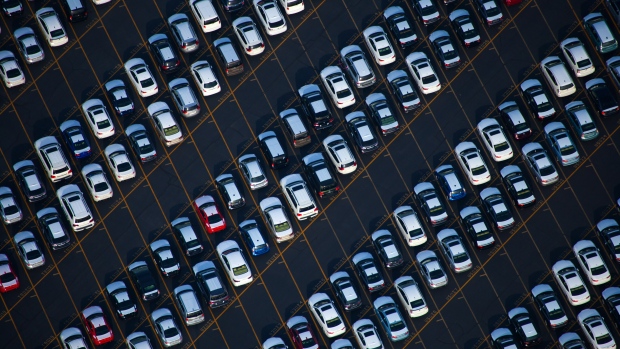 Rows of Toyota Motor Corp. vehicles sit lined up, waiting to be picked up by dealers at the Port of Long Beach in Long Beach, California, U.S., on Friday, Dec. 21, 2012. , Tim Rue/Bloomberg

Wall Street may be underestimating the threat of tariffs on the auto industry, according to Phil Levy, a senior fellow on global economy at the Chicago Council on Global Affairs.

“I think it’s better than even odds that they go ahead with this, and go ahead with this reasonably soon,” Levy said in a phone interview. “If investors and traders don’t get smarter, they are likely to be surprised by continued earnings shocks and by escalations of key disputes.”

Shares of automakers, suppliers and car part retailers have had a volatile few months. European suppliers are bracing themselves for levies and U.S. companies such as Ford Motor Co. are already being hit by high steel prices. The Trump administration is said to be holding off for now on imposing tariffs on auto imports as top officials weigh revisions to a report on the national security implications.

Levy, who served on George W. Bush’s Council of Economic Advisers, said the tariffs would probably not benefit U.S. car companies in the long-run. “Cutting off supply chains will not make U.S. auto makers more competitive.”

Not everyone agrees. RBC analyst Joseph Spak wrote in a research note on Tuesday that he expects domestic carmakers to gain on the tariffs, while European, Japanese and Korean suppliers may fall.

“GM and Ford effectively import nothing from outside of North America,” Spak wrote. “Meanwhile for Tesla, which to date competes against mainly German luxury brands, this could make their pricing more advantageous.”