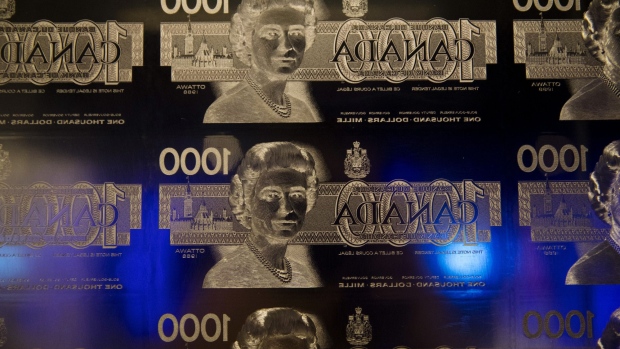 Canadian one thousand dollar intaglio printing plates sit on display at the Bank of Canada Museum in Ottawa, Ontario, Canada, on Thursday, Aug. 16, 2018. It makes sense for the U.S. and Mexico to meet bilaterally on Nafta on certain issues and Canada looks forward to rejoining talks on the trilateral pact in the coming days and weeks, Prime Minister Justin Trudeau said. Photographer: Brent Lewin/Bloomberg , Bloomberg

The Bank of Canada said it will start acquiring provincially-issued money market securities, the latest in a series of steps to smooth friction from the nation’s financial system.

The central bank said Tuesday it will buy securities directly from provinces through its newly established Provincial Money Market Purchase facility, with the first operation scheduled for March 25. The Ottawa-based bank had unveiled a series of programs aimed at injecting liquidity into Canadian funding markets, which continue to show signs of strain despite the best efforts of policy makers.

That’s partly due to a sharp rise in short-term borrowing by provinces, according to Ian Pollick. “A proximate reason why short-end rates in Canada have been continuing to rise reflects the additional and unexpected supply of provincial money-market paper,” Pollick, global head of FICC strategy at Canadian Imperial Bank of Commerce, said by email. Today’s announcement “should help to alleviate some of the pressure.”

Some of the other liquidity-boosting moves over the past couple of weeks include the acquisition of securities directly linked to corporate credit lines, increasing the frequency with which it undertakes money market operations, and expanding the range of collateral it’s willing to accept. That’s on top of cutting interest rates by a full percentage point this month. Investors anticipate more cuts soon.

There’s “little from the Bank of Canada that would surprise me at this point,” said Brian DePratto, senior economist at Toronto Dominion Bank.