BoC and Fed will react if there is ongoing inflation in 2023: Former BoC governor David Dodge

Bank of Canada officials need to “temper their enthusiasm” that strong inflation readings will be short-lived, according to one former governor.

There’s a chance underlying price pressures in the economy remain above the central bank’s 1 per cent to 3 per cent control range into 2023, David Dodge said in an interview, adding that policy makers led by Governor Tiff Macklem should acknowledge that possibility.

“By insisting it’s all temporary they tend to undermine their own credibility, which is unfortunate,” Dodge said by phone Tuesday. “It’s better to be humble and say that’s what we think, but of course there is a chance things could be different.” 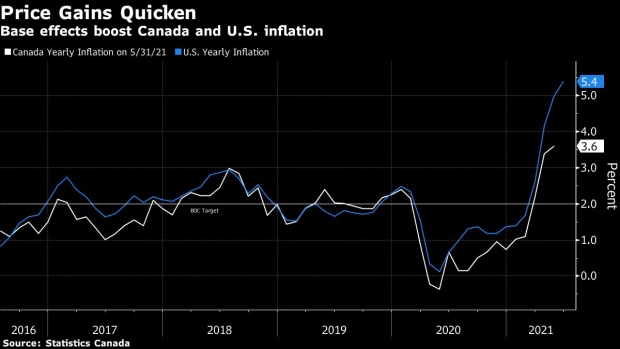 Dodge, who held Macklem’s job from 2001 to 2008 and is now a senior adviser at Bennett Jones LLP, said he expects the Bank of Canada will communicate that risk in its September rate decision. “I think their language will be a little less on the temporary aspect of things and greater recognition there may be more longer term pressures in the system,” he said.

Statistics Canada is due to release inflation data for June on Wednesday, with economists expecting consumer prices to increase by 3.2 per cent, according to the median estimate in Bloomberg survey. The Bank of Canada has cautioned that readings are likely to be above its 2 per cent target in the coming months due to higher gasoline prices, supply chain disruptions and a weak comparison to year-ago levels when the country was emerging from initial COVID-19 lockdowns.

However, the bank sees these price pressures as largely transitory. In its July policy decision, which included paring back the bank’s weekly purchases of government of Canada bonds for a third time, the bank conceded inflation will remain above 3 per cent for much of this year before falling back closer to target later in 2022.

“We expect the factors pushing up inflation to be temporary, but their persistence and magnitude are uncertain, and we will be watching them closely,” Macklem told reporters after the decision.