Bitcoin extended gains past US$32,000, continuing a rebound after erasing most of its gains for the year. The latest leg up came in as Elon Musk, Jack Dorsey and Cathie Wood spoke during a panel on the future of Bitcoin.

The largest digital currency rose more than 8 per cent to about US$32,270 as of 2:27 p.m. in New York on Wednesday. Other cryptos advanced too, including Ether and Dogecoin, while the Bloomberg Galaxy Crypto Index was also in the green.

Musk, the chief executive of Tesla Inc., reiterated his backing of Bitcoin, saying he owns the token along with Dogecoin and Ethereum. He also said Space Exploration Tecnologies Corp. also owns Bitcoin, like Musk’s electric-car company.

The token bounced back after sliding below US$30,000 earlier in the week, its first foray there since June. 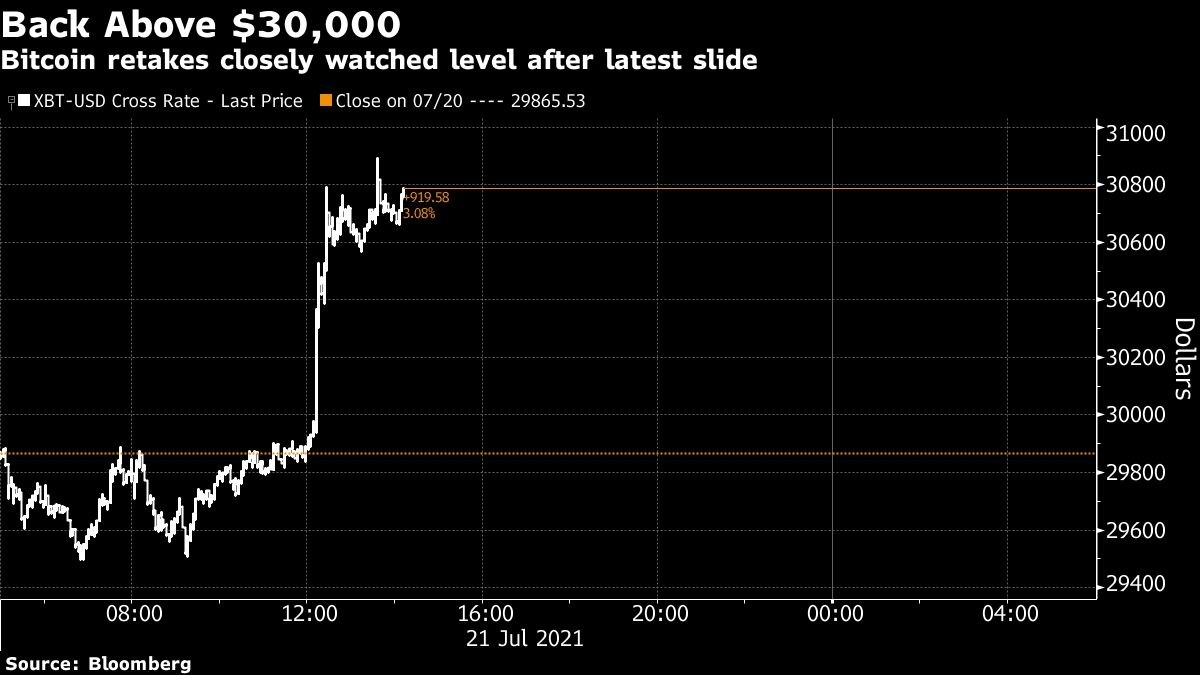 Bitcoin and other cryptocurrencies have tumbled since mid-May, wiping some US$1.3 trillion off their market value. Bitcoin has faced a range of obstacles, including stepped up regulatory scrutiny in China, Europe and the U.S. and concerns about the energy needed by the computers underpinning it. Investors have also generally become more cautious about speculative assets.

Bitcoin may still test the US$25,000 support level in the coming weeks, Ava Trade’s Aslam said. A break above US$32,000 would herald a stronger recovery, according to Steen Jakobsen, chief investment officer at Saxo Bank.

“Bitcoin and Ethereum did manage to pull a rally together after Bitcoin had dropped down through the key US$30,000 area yesterday, but really needs to recover above US$32,000 sustainably to dig itself out of a hole,” Jakobsen wrote in a note.

Proponents argue the virtual currency offers an inflation hedge and will win wider institutional acceptance. Such narratives were always controversial and are now under even more question, though Bitcoin’s most ardent fans continue to predict big long-term returns.

“Regulatory and environmental concerns will likely keep Bitcoin heavy but improvements on both fronts should happen before the end of the year,” Edward Moya, senior market analyst for the Americas at Oanda, wrote in a note. He added institutional investors “are ready to place big long-term bets” if a plunge toward US$20,000 is avoided.