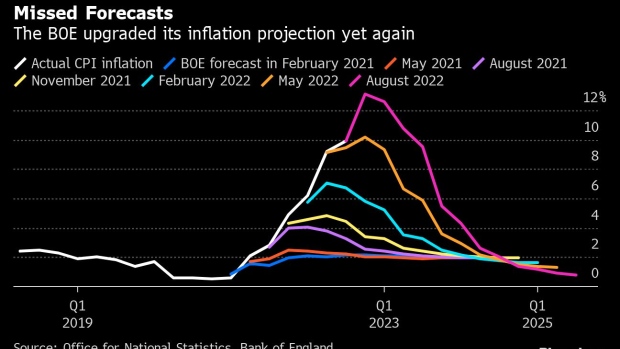 “We will get back there,” Pill said at a briefing for the UK central bank’s contacts on Friday. “But it’s going to be a process, which is going to take time reflecting the magnitude of the shocks we’ve seen.”

The remarks answer criticism the BOE has let inflation spin out of control, with consumer prices rising at the strongest pace in 40 years and set to accelerate past 13%. Projections published by the bank on Thursday show inflation staying above target for another two years.

Pill said the goal is achievable over the “medium term” and that interest-rate increases the BOE pushes through will have an impact on the economy in 18 months or more. He blamed a surge in natural gas prices, which are seven times higher now than a year ago, on the jump in inflation.

“The changes in energy prices we’ve seen in markets over past few months, the doubling of price” since April, “that wasn’t something that was anticipated. If we had implemented monetary policy it would not have been able to impact that change.”