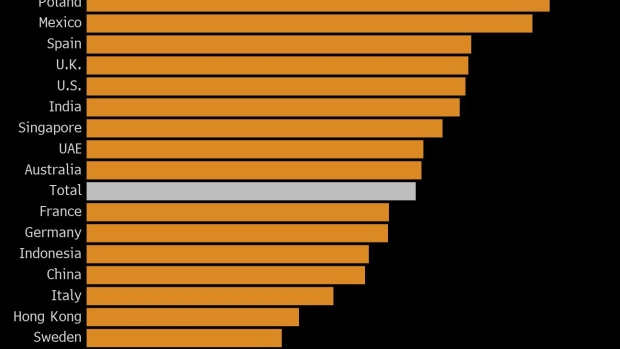 (Bloomberg) -- Central bankers worldwide are weighing the probability of higher inflation. Consumers around the world say they are already feeling the pinch.

About 40% of respondents said their living costs have increased since the onset of the pandemic, according to a YouGov survey of 18,983 people conducted in 17 countries. That proportion was closer to half in the U.K. and U.S., compared to just a fifth of Danes and Swedes.

The survey, carried out between Aug. 17th and Aug. 28th, underlines the challenges facing policy makers, who must decide whether to act on signs prices are heading higher after years of stability. That’s leading some investors to anticipate an increase in interest rates.

In the U.K., inflation surged more than expected to the strongest pace in more than nine years with consumer prices jumping 3.2% in August from a year ago, the most since March 2012, the Office for National Statistics said on Wednesday. Labor and material shortages may lead to more persistent inflation, with a surge in energy costs due to hit in coming months.

The YouGov survey, whose results were made available to Bloomberg, also examined attitudes to the banking industry. Banks closing branches to save costs can take heart: most customers worldwide prefer their mobile apps anyway.

From East Asia to Latin America, apps are the most popular choice to access banking services, according to the survey. The only outliers were Germany and Denmark, where more customers said websites were their favorite way to bank.

Lenders around the world have been shuttering branches since the financial crisis -- a trend that saves on running costs but risks widening the wealth gap in some areas. In the U.K., some analysts have said about a third of retail branches could be closed after the Covid-19 pandemic pushed more customers to try virtual services.

Many customers still want to visit branches, though. About a quarter of customers in the U.S. said in-person services were their preferred method of banking, compared to 16% in the U.K. and 8% in Denmark, according to the poll.

Telephone banking also has some fans left in Hong Kong, where 13% said it was their favorite method, and the UAE, where 11% prefer to call up.

The rise of online banking doesn’t mean consumers are comfortable with it, with 55% of respondents saying they are very worried or fairly worried about banks’ ability to protect their personal information from cyber criminals. About 51% were worried about the threat cybercriminals posed to their money.

Some of that comes from bitter experience, with 16% of those surveyed saying they had been a victim of some kind of bank account fraud, more than any other type of online scam, according to the survey.

Banks still have plenty of work to do to win the hearts and minds of their customers in most markets, particularly Western Europe. Less than a quarter of respondents held a favorable view of the industry, a proportion that fell to about tenth in the U.K., Germany and Spain.