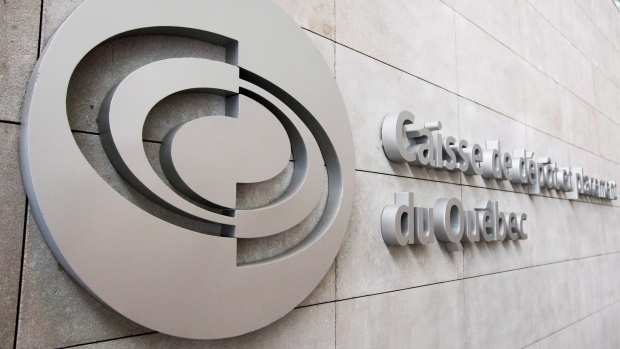 The Caisse de Depot logo is seen at their headquarters in Montreal. The Quebec pension fund manager posted a 9.1% return for 2015. , The Canadian Press

MONTREAL -- The Caisse de depot et placement du Quebec (CDPQ) missed its benchmark portfolio last year due to lacklustre performance of real estate and infrastructure assets and a focus on long-term stability, even as it enjoyed its strongest return on investment in five years.

The Quebec pension fund manager generated a 10.4 per cent annual return on investments in 2019, or $31.1 billion, growing its net assets to $340 billion. Its benchmark portfolio, however, grew 11.9 per cent.

Chief executive Charles Emond, who succeeded Michael Sabia as CEO this month, said he expects the coming decade to be more challenging than the past one, when investors rode "the longest bull market in history."

Emond said the Caisse is aiming for caution amid a growing gap between real economic performance and a soaring stock market.

"Overall, CDPQ's portfolio is built to be more stable over the long term and less vulnerable to sharp market movements, so it is well positioned to take on the headwinds that await us," he said.

In the past five years the Quebec pension giant has yielded investment results of $106 billion -- an 8.1 per cent return -- with net deposits of $17.5 billion.

Its real estate holdings, which saw a 2.7 per cent negative return on investment last year, suffered from the decline of shopping malls across the country -- the Caisse owns 25 in Canada -- and weaker residential real estate in New York following rent control regulations, the Caisse said Thursday.

The Caisse's infrastructure portfolio return of 7.1 per cent was well below the benchmark index return of 17.7 per cent, which the Caisse says is due up to lower-risk assets with long-term promise.

The Caisse's one-third stake in Bombardier Inc.'s rail division converted into an 18 per cent share in Alstom SA after the French train giant bought Bombardier Transportation, pending closure of the deal announced Monday. The deal would make the Caisse Alstom's single largest shareholder.

"I've been told that a lot of people thought we had enough," Emond said, stating that he has no intention to buy more shares "for the time being."

The acquisition by Alstom is expected to come under intense scrutiny from antitrust regulators in the European Union, but Emond expressed confidence the deal would pass regulatory muster.

"I think we've got a very strong case to actually see this go through," he told reporters.