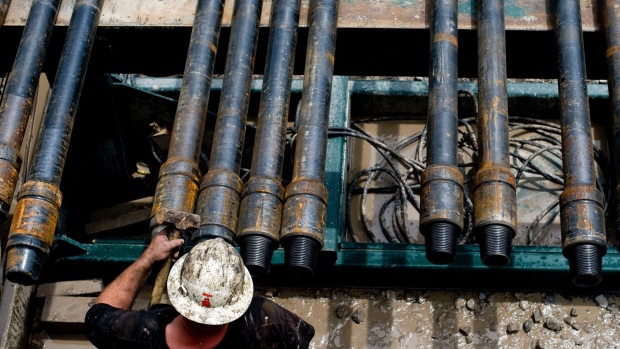 A drill hand prepares drill pipe as a shale-gas well is drilled in Mannington, West Virginia, U.S., on Friday, April 30, 2010. This well was being drilled into the Marcellus Shale, a formation that may hold 262 trillion cubic feet of recoverable natural gas, making it the largest known deposit according to a U.S. Energy Department estimate. , Photographer: Bloomberg/Bloomberg

CALGARY -- Calfrac Well Services Ltd. is seeking to restructure in a plan that will see its debtholders swap unsecured notes for shares in the company.

The company says it has obtained a preliminary interim order under the Canada Business Corporations Act as part of its plan.

Calfrac noted that all trade debt and obligations of the company to employees, customers, suppliers and service providers will be unaffected.

Under the plan, holders of the Calfrac's unsecured notes will receive shares in the company in exchange for the debt.

The existing holders of Calfrac's common shares will hold an eight per cent stake in the company once the transaction is complete.