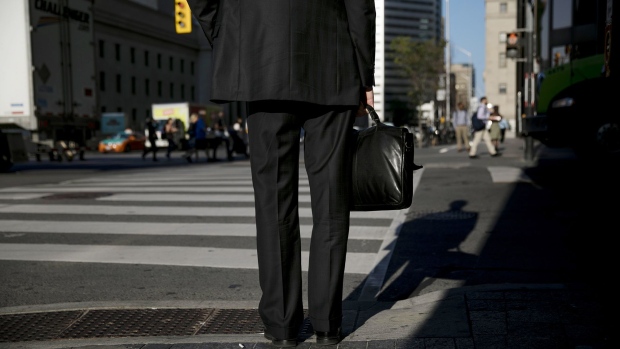 A pedestrian waits to cross a street in the financial district of Toronto. , Photographer: Brent Lewin/Bloomberg

Callidus Capital Corp. is being taken private by its second-largest investor, bringing an end to a slump that saw most of the shareholder value erased from the debt fund founded by Canada’s Newton Glassman.

Braslyn Ltd., which owns about 15 per cent of Toronto-based Callidus, reached a deal to buy the minority shares not owned by Glassman’s Catalyst Capital Group Inc., the majority shareholder. Braslyn is offering $0.75 apiece, 63 per cent below an offer it made in December, and 95 per cent below the company’s initial offer price of $14 in 2014.

Callidus could face “insolvency and/or liquidation” due to significant operating losses that will leave it unable to repay loans from Catalyst due in September 2020, without the go-private transaction, the lender warned in a statement Friday. Loans from Catalyst totaled $421 million as of Aug. 8.

Callidus has been exploring the possibility of going private since at least 2016. Glassman said at the time that the company’s shares, which were above $16, “trade at a significant discount.” The stock jumped 76 per cent to $0.72 at 9:52 a.m. in Toronto.

Callidus has been targeted by short sellers for much of the time it’s been public, with critics questioning the quality of its loan book. On Wednesday, the company reported an unaudited net loss of $79.7 million for the second quarter compared with a loss of $40.8 million the same period a year ago.

The offer from Bahamas-based Braslyn, owned by British billionaire Joe Lewis, has been recommended by a special committee of Callidus’s independent directors. In order to be approved, a simple majority of the company’s minority shareholders must vote in favor.

Callidus said it was unable to find other interested buyers after a lengthy search.

The debt fund announced in March that its interim CEO Patrick Dalton had resigned, without providing any explanation. Dalton’s exit came less than five months after he took over for Glassman, who stepped down due to medical reasons. Callidus said in July Glassman asked the board not be to reappointed CEO for the same reason.

--With assistance from Paula Sambo